Leipzig came out a better side in the second half with manager Julian Nagelsmann making a double change but once again it was PSG that extended the lead and took the game out of Leipzig’s reach. Nordi Mukiele slipped while trying to clear a ball and Di Maria immediately found Bernat and the left full-back headed in for 3-0 to steer PSG home. 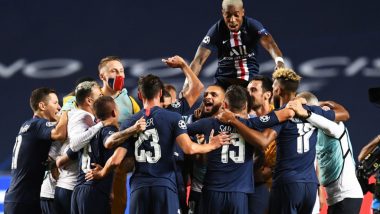 Paris Saint-Germain beat RB Leipzig 3-0 in the first semi-final of the UEFA Champions League 2019-20 on Tuesday with Angel di Maria, Marquinhos and Juan Bernat finding the net to take the French giants to their first-ever final in the tournament’s history. They will face the winner between Bayern Munich and Lyon, who play the second semi-final, in the championship match. PSG, who left it late against Atalanta in the previous round, were in the money right from the start against Leipzig. Their last semi-final appearance in the UCL before this had come in 1995 and they were knocked out of it. PSG Beats RB Leipzig 3-0 to Reach the Finals of the Champions League 2019-20, Netizens Hail Angel DI Maria for Prolific Records (See Tweets).

But Thomas Tuchel’s men showed history didn’t bother them. They had left it late in the quarter-final against Atalanta but with Angel di Maria and Kylian Mbappe returning to the squad for the semis, PSG were confident right from the start. The Ligue 1 side nearly went forward in the seventh minute when Mbappe set-up Neymar clear on goal but the Brazilian’s shot brushed the post. Minutes later Mbappe’s goal was ruled out for a handball.

But PSG didn’t have to wait longer. Marquinhos headed home a Di Maria free kick in the 13th minute to put them forward making it for the 34th consecutive time that PSG have scored in Champions League matches, a record they now hold jointly with Real Madrid. RB Leipzig, who were aiming to reach the final for the first time in the German club’s 11-year history, didn’t really turn up in the first half and were all over the place.

Marquinhos Opens the Scoring for PSG

Neymar once again came close with his audacious free-kick from 25 yards out striking the post. PSG weren’t done yet. And just as Leipzig thought they had kept the French side down to 1-0 in the first half, goalkeeper Peter Gulacsi found Lenardo Paredes with a straight ball from the back. The Argentine’s pass to Neymar was brilliantly flicked into the path of Di Maria, who made it 2-0.

Juan Bernat Adds Another in the Second Half

Leipzig came out a better side in the second half with manager Julian Nagelsmann making a double change but once again it was PSG that extended the lead and took the game out of Leipzig’s reach. Nordi Mukiele slipped while trying to clear a ball although Leipzig could complain Ander Herrera had clipped his heels. Di Maria immediately found Bernat and the left full-back headed in to make it 3-0 to steer PSG home with 34 minutes of play still remaining.

(The above story first appeared on LatestLY on Aug 19, 2020 09:05 AM IST. For more news and updates on politics, world, sports, entertainment and lifestyle, log on to our website latestly.com).