The French side have had mixed results so far in recent times with two defeats and one win in their last three matches across all competitions. PSG still remain at the top of the Ligue 1 2021-22 points table with a 12-point lead. 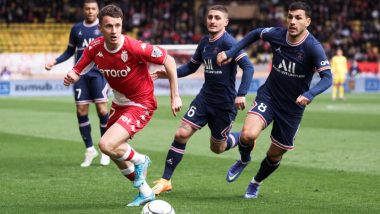 All is definitely not well within the PSG camp at the moment. The French giants were knocked out of the UEFA Champions League by Real Madrid despite having a 2-0 aggregate advantage over them at one point and recently, they slumped to an embarrassing 3-0 defeat to AS Monaco in Ligue 1. According to a report in RMC Sport, there seems to be a rift within the PSG dressing room wherein the players have divided themselves into two groups--based on Spanish speakers and French speakers. One group among these two have stated that the club is lenient towards the other group, despite PSG's poor run in recent times. Ligue 1 2021-22: Monaco Stun PSG 3-0, Marseille Move to Second Spot After Win Over Nice

The former French champions sorely missed Lionel Messi in their match against Monaco with the Argentine going down with flu. Messi has had a pretty average season as per his standards and in his absence, Kylian Mbappe, who has been their most in-form player this season, failed to inspire PSG to a win with Neymar as his attacking partner. Despite the defeat, PSG retained their top spot on the Ligue 1 2021-22 points table and are favourites to win the title. They currently have 65 points, 12 more than second-placed Marseille after 29 games. Is Kylian Mbappe Joining Real Madrid? Karim Benzema Drops Major Hint on PSG Star Linking Up With Him at Santiago Bernabeu Next Season

Mauricio Pochettino's side next would face Lorient in Ligue 1 and expect three points, which would help them consolidate their spot and also increase chances of their title victory. Winning the Ligue 1 title could ease some reported tension within the dressing room.

(The above story first appeared on LatestLY on Mar 22, 2022 02:50 PM IST. For more news and updates on politics, world, sports, entertainment and lifestyle, log on to our website latestly.com).