Is Kylian Mbappe Joining Real Madrid? Karim Benzema Drops Major Hint on PSG Star Linking Up With Him at Santiago Bernabeu Next Season

Mbappe is highly rumoured to be making a move to Real Madrid next season and Benzema, who is close to the player, might just have dropped a hint of how things can transpire in the coming months. Mbappe's PSG were dumped out of the UEFA Champions League by Real Madrid where Karim Benzems starred with a sensational hattrick. 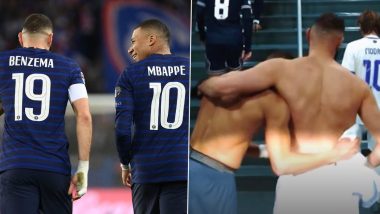 One of the most highly anticipated transfers that can be expected next summer would be that of Kylian Mbappe moving to Real Madrid. The Frenchman, for a very long time now, has been linked with a move to Santiago Bernabeu and despite many efforts from PSG to retain their star man, all of it has, so far, seemed to go in vain with the player even reportedly turning down a 'blank-cheque' renewal offer earlier. Now when rumours of him joining Real Madrid are increasing, Karim Benzema has dropped a major hint on his Instagram, which can be considered as a prelude of things to come.  Kylian Mbappe Transfer News Latest Update: PSG Table Multi-Million Contract Offer For Frenchman

The 34-year old striker, who recently starred with a second-half hattrick to dump Mbappe's PSG out of the Champions League round of 16, has taken on Instagram to share a picture of him and the youngster hugging in the tunnel, reportedly after the game.

Take a look at the picture below: 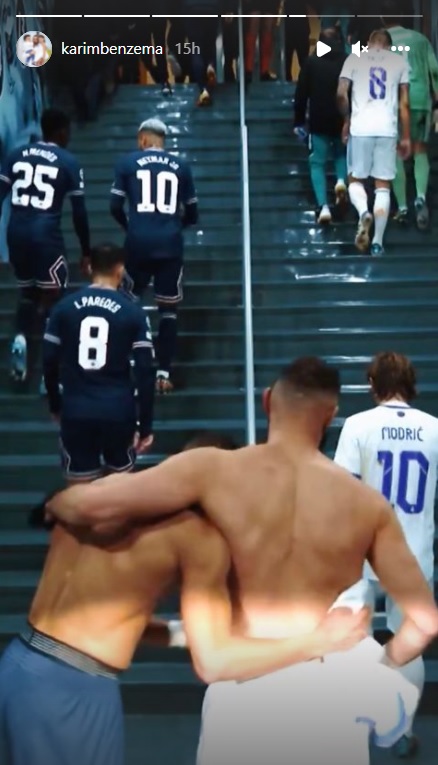 The duo also play together for the French national team and Real Madrid fans would be in for a treat if Mbappe completes his move to Spain at the end of this season. Benzema also shares a very good bond with the young Mbappe and it would be interesting to see how they two link up and perform if the transfer finally comes through. Surely, Real Madrid would have a very deadly attack with both Benzema and Mbappe in their ranks, if the latter joins the club. Cristiano Ronaldo Blasts Referee Slavko Vincic During Manchester United's Champions League Exit (Watch Video)

Mbappe was PSG's lone scorer in both legs of the round of 16 tie against Real Madrid in the Champions League. The French outfit would still be very keen on tying down the young forward, who is one of the current stars in world football but it would not be that easy. Also, Mbappe's love for Real Madrid and Cristiano Ronaldo is not new. A picture of him at a small age had gone viral long ago where he is seated with the walls around him covered with Ronaldo's posters in a Real Madrid jersey.

(The above story first appeared on LatestLY on Mar 17, 2022 05:00 PM IST. For more news and updates on politics, world, sports, entertainment and lifestyle, log on to our website latestly.com).