Messi, in his speech after winning Ballon d'Or 2021 title, said, "I would like to mention Robert Lewandowski, it’s been a real honour to compete with you. Everyone knows and we agree that you were the winner last year. I think France Football should award you your 2020 Ballon d’Or - you deserve it and you should have it at home." 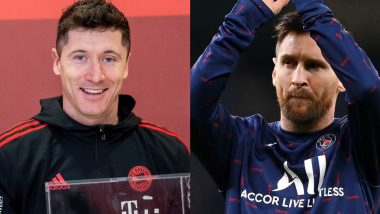 Robert Lewandowski missed out on the Ballon d'Or 2021 title but acknowledged that closest competitor Lionel Messi's words were 'really touching'. Messi bagged his career's seventh and record Ballon d'Or title earlier this year and while addressing the audience in his speech, he mentioned that it was an honour to compete with Lewandowski, acknowledging that the Poland striker should have won the Ballon d'Or title last year. Earlier in an interview, Lewandowski had hoped that it was not empty words coming from a person of Messi's stature. Lionel Messi’s Numbers Have Been Incredible, if You Argue, You Don’t Know Anything About Football, Says PSG Sporting Director Leonardo

And in a following interview, he shared, "Messi's words towards me [about the Ballon d'Or] really touched me," Lewandowski said, as quoted by Bild. "They weren't empty words, it was a nice moment in my career. I only spoke a few words with Leo [face to face], because my Spanish is not that good. I spoke with Kylian [Mbappe] in English, he then translated for Leo. It was a great night," he added.

Messi, in his victory speech, had said, "I would like to mention Robert Lewandowski, it’s been a real honour to compete with you.  Everyone knows and we agree that you were the winner last year. I think France Football should award you your 2020 Ballon d’Or - you deserve it and you should have it at home. I think Robert Lewandowski had a great year. Year after year, he improves and shows the excellent striker he is, as well as his ability to score goals. This year he was awarded as the top scorer. Of course, he can certainly aspire to that level next year, thanks to his way of being on the pitch. And in addition, he plays for a big club."

Lewandowski not winning the Ballon d'Or 2021 title did stir up a bit of controversy with many arguing that the Bayern Munich striker deserved the award over Messi. When asked as to what is needed to get hold of the title, he said, "It's about little details, everything has to be in place. What I can guarantee is that I'll continue doing my job and bring my best performances."

The forward has so far netted a whopping 69 goals in 2021 and recently starred with a goal in Bayern Munich's 4-0 victory over Wolfsburg in the Bundesliga.

(The above story first appeared on LatestLY on Dec 22, 2021 04:53 PM IST. For more news and updates on politics, world, sports, entertainment and lifestyle, log on to our website latestly.com).