Barcelona coach Xavi has been in constant contact with Robert Lewandowski over a potential move. The Polish international has been one of the star performers since signing for Bayern Munich but wants to take on new challenges in his career. 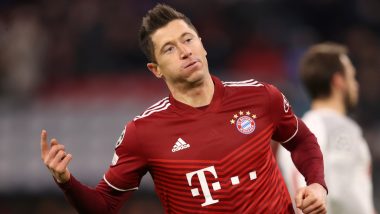 Robert Lewandowski is in close contact with Barcelona over a potential move in the summer. The Catalan giants want to sign the Polish striker who will be out of contract with Bayern Munich next year. The 33-year-old also prefers joining the Catalans as he looks for a new challenger but an agreement is yet to be reached between the two clubs. Robert Lewandowski Attends Phone Call in Bayern Munich Dressing Room, Mentions FC Barcelona in Front of Teammates: Report.

It is understood that Barcelona and Robert Lewandoski have agreed on personal terms. The 33-year-old will receive a three-year contract worth €9 million per year. which will see him stay in Catalonia until 2025. The Blaugranas need\ to reach a deal with Bayern Munich for the transfer.

Robert Lewandowski's contract with the Bavarians expires in 2023 but the forward wants to leave now and Barcelona is his number one priority. Chelsea and Paris Saint-Germain are said to be in the running but the Catalan giants are leading the pack.

However, Bayern Munich aren't too keen on letting go of one of their key players. The Bavarians hope to keep the striker and let him see out his contract. They have offered him a year's extension but Robert Lewandowski is not on board with the new deal.

The Bundesliga club run the risk of losing the 33-year-old for free next summer. So could look to cash in on the striker if he begins to force an exit. Barcelona will need to break the bank for the forward which could see them part ways with some of the current stars.

(The above story first appeared on LatestLY on May 20, 2022 04:51 PM IST. For more news and updates on politics, world, sports, entertainment and lifestyle, log on to our website latestly.com).