All signs point to a swift end to the era of star striker Robert Lewandowski in the Bayern Munich shirt. 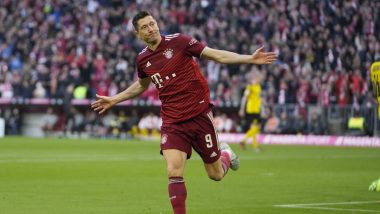 After eight years with the Bavarians, the Polish international announced that he might well have played his last game for Bayern. Salihamidzic confirmed that the striker and his agent Pini Zahavi told the club about their intention to leave this summer "as the player wants to experience a new challenge". Lewandowski talked of a solution that has to be found to please both sides, saying he won't extend his contract in Munich, Xinhua reports. Barcelona are said to have placed an offer, while other European sides are expected to join the race.

Bayern are said to demand a transfer fee of 35 to 40 million euros this summer. Advantages in the struggle seem to be on the attacker's side, as Bayern most likely won't risk keeping a striker in a bad mood for a season. Both sides presented contrary views as Bayern spoke about an offer for the striker, while Lewandowski denies having received one. The Poland captain was visibly touched while saying goodbye to Bayern's fans after the club's last Bundesliga match of the season at Wolfsburg. Shortly after, he posted a farewell message on social media along with a photo presenting his trophy for being the league's top scorer with 35 goals. West Ham 2-2 Manchester City, EPL 2021-22: Riyad Mahrez Misses Penalty But The Citizens Keep Edge In Title Race (Watch Goal Video Highlights).

With Lewandowski, the Bundesliga is set to lose its second top international star, as Borussia Dortmund's Erling Haaland is to join Manchester City, signing a five-year contract. Both Bayern and Dortmund are said to target the same replacement candidates. Meanwhile, the 2021 FIFA World Footballer of the Year has increased the pressure on Bayern to allow his departure. Reports speak of Bayern having to meet the wishes of a player after 11 national titles aside from a 2020 UEFA Champions League win. Bayern coach Julian Nagelsmann demanded to "quickly think about the future" and spoke about the challenge to find a replacement "sometimes next season". The 34-year-old confirmed that Lewandowski has told him about his intentions.

Bayern icon Thomas Muller spoke of the club in a better position "as he has a contract. But we all know about the business". The German international added Lewandowski's age doesn't play a role as "he is highly professional". German media speak of Zahavi already having set up an agreement with Barcelona for a three-year contract. Lewandowski's former agent Cezary Kucharski said Spain has always been the striker's target. Bayern's leaders such as chairman Oliver Kahn and Salihamidzic face the challenge to find a convincing replacement, not only to please its fans but to replace one of their most successful strikers.

(The above story first appeared on LatestLY on May 16, 2022 10:34 AM IST. For more news and updates on politics, world, sports, entertainment and lifestyle, log on to our website latestly.com).