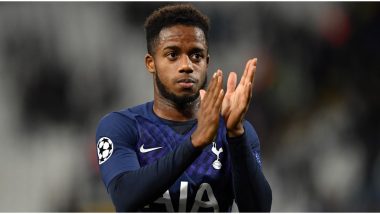 Teenage sensation Ryan Sessegnon celebrates his 20th birthday on May 18, 2020 (Monday). Born on this day in 2000, the Tottenham Hotspur and England footballer is quite a wanted man in the footballing universe even before his 20th birthday. Sessegnon, who started his career with Fulham, scripted history when he scored in a league match against Cardiff City becoming the first-ever footballer born in the 21st century (on after January 1, 2000) to score in a top-flight professional League in England. The goal also made Sessegnon the youngest player ever to score in the EFL championship. English Premier League Can Resume in June As per UK Government’s Latest Lockdown Plans.

Sessegnon was born in Roehampton, London and is a distant cousin of Benin international Stephane Sessegnon, who has played for the likes of Paris Saint-Germain, West Bromwich Albion and Sunderland. Ryan also has a twin brother Steven and he plays as a defender for Fulham. Ryan and Steven joined the Fulham academy at nine and came through the academy to play for the senior team.

Ryan was certainly the more athletic and productive among the twins and made his senior debut for Fulham at the age of 16 as a left-back. He made his maiden league appearance for Fulham in Championship in a 1-1 draw against Leeds United and scored in his second game etching history. Days later, Ryan also scored in his FA Cup debut against Cardiff making him one of the youngest goal-scorers in the competition. Take a look at some lesser-known facts about Ryan Sessegnon

By 17, Ryan Sessegnon was already one of the regulars in the Fulham senior team and also netted his first hat-trick for the club in a 5-4 away win against Sheffield United. The game at Bramall Lane was also Ryan’s 50th appearance for Fulham. He also helped Fulham secure promotion to the Premier League in 2018, reaching several milestones along the way. But his campaign in the Premier League wasn’t as productive as in the Championship. It also didn’t help that Fulham were battling relegation threat for a major part of the league.

Fulham were relegated into the Championship at the end of the 2018-19 English Premier League season. And ahead of the start of the new season, it was announced that Ryan Sessegnon had joined Tottenham Hotspur on a five-year deal. In six appearances for Spurs, Sessegnon has already scored once.

(The above story first appeared on LatestLY on May 18, 2020 04:44 AM IST. For more news and updates on politics, world, sports, entertainment and lifestyle, log on to our website latestly.com).