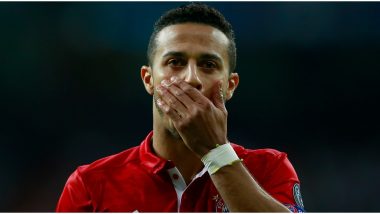 Bayern Munich have put a €30million price tag on Liverpool and Manchester United target Thiago Alcantara, say reports in the German media. The 29-year-old former Barcelona playmaker has just one-year left in his Bayern contract and has already informed the club that he won’t be extending his contract and wants to move to the Premier League. Thiago has been heavily linked with Liverpool although Manchester United remains outside contenders for the Spanish midfielder. And recent reports suggest that Bayern have now slapped a price tag on the midfielder and will not sell the midfielder below that price. Lionel Messi Transfer News Update: Antonio Conte Shuts Down Rumours, Says ‘Easier to Move the Dummo Than Sign Barcelona Star’.

Liverpool are said to have already agreed personal term with the player but have had no discussions with the club. Earlier, it was reported that Liverpool’s initial bid of €18m was rejected by Bayern. But according to Sport Bild, the club have not received any official bid for the player. The German outlet also informed that Bayern Munich have now put a price tag on Alcantara and expect a minimum €30million for the star. Arkadiusz Milik Transfer News: Manchester United Target Agree Terms With Juventus, Will Join Serie A Winners As Cristiano Ronaldo’s Strike Partner.

Liverpool, however, are yet to make an official bid for the midfielder despite being the overwhelming favourites to sign him. According to several reports in England, the newly Premier League champions are concerned about the player’s age and his injury record.

‘I have no idea who will play for me next year, there is nothing to say at the moment,” Liverpool coach Jurgen Klopp was quoted saying when asked about Thiago’s signing. “Thiago Alcantara is a great player, but also a Bayern Munich player. That’s actually all there is to say. There’s nothing to say!”

(The above story first appeared on LatestLY on Jul 29, 2020 07:07 PM IST. For more news and updates on politics, world, sports, entertainment and lifestyle, log on to our website latestly.com).