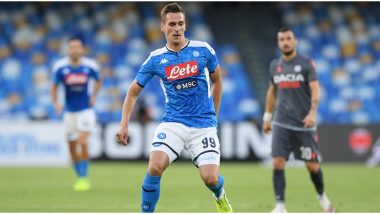 Manchester United have been dealt with a huge transfer blow in the opening weekend of the 2020 summer transfer window after failing to agree terms with Napoli striker Arkadiusz Milik. The Polish striker is reportedly set to join Serie A champions Juventus. Milik, who was part of the Napoli side that beat Juventus on penalties to win the 2020 Coppa Italia title, was a transfer target for Ole Gunnar Solskjaer and Manchester United, has reportedly agreed to team up with former United forward Cristiano Ronaldo at Juventus. Cristiano Ronaldo Is the Michael Jordan of Football, Says Manchester United Winger Jesse Lingard.

Solskjaer and United wanted Milik at Old Trafford as a back-up option to Anthony Martial. United currently have Odion Ighalo as their back-up striker but with the Nigerian’s loan deal expiring next January, the Red Devils could once be left without a proper second-choice striker for the business end of the season. In this regard, Solskjaer was in the market for the forward and saw Milik as a perfect choice but it seems that Juventus have been quick and beaten United to the securing the striker’s signature.

According to a report from The Sun, Arsenal and Tottenham Hotspur also showed interest in the Napoli striker, who had scored 11 times in 26 Serie A appearances this season. The 26-year-old is the club’s highest goalscorer this season and has already found the net 48 times in four-seasons at Naples. Earlier, Napoli coach Gennaro Gattuso had confirmed Milik’s desire to leave the club this summer.

The Polish international’s current Napoli expires at the end of the next season and the club is looking to cash in for the striker, who joined for Ajax in 2016. "It's difficult to find someone better than Milik," Gattuso told Sky Sport Italia. "However, when a player believes his time at a club is over and he wants a change of scenery, you have to listen to him. You can't try to keep someone against their will, or it's difficult to get them to listen or have the right mentality. You have to respect the wishes of the player."

Napoli have already reportedly accepted a £45million bid from Juventus for the striker. According to Gianluca Di Marzio, the player has already agreed personal terms with Juventus and is waiting for both clubs to agree to a deal before going to Turin for his medical. At Turin, he is seen as the potential replacement for Gonzalo Higuain, who will leave the club this summer.

Juventus completing the signing of Milik will come as a huge blow for United, who will then have to look elsewhere for a striker. The Red Devils were also linked to young Lille striker Victor Osimhen but Napoli have already swooped the 21-year-old as the replacement for the outgoing Milik.

(The above story first appeared on LatestLY on Jul 29, 2020 12:55 PM IST. For more news and updates on politics, world, sports, entertainment and lifestyle, log on to our website latestly.com).