UCL Round of 16 Draw: Twitterati React With Funny Memes and Jokes After Barcelona vs PSG and Chelsea vs Atletico Madrid in UEFA Champions League 2020–21

Barcelona will play Paris Saint-Germain in the UEFA Champions League 2020-21 round of 16 in what will be a repeat of perhaps the greatest UCL match ever played. Barcelone overcame a 0-4 deficit and beat PSG 6-1 at home to win the two-legged tie 6-5 when both these teams last clashed in the Champions League four seasons ago. 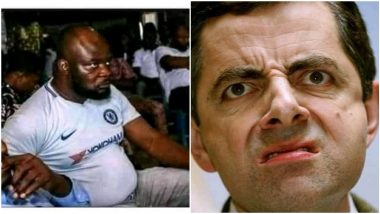 Barcelona will play Paris Saint-Germain while Chelsea will face Atletico Madrid in the UEFA Champions League (UCL) 2020-21 round of 16 after the seeds for UCL knockouts were drawn at the UEFA headquarters in Nyon, Switzerland on December 14, 2020 (Monday). Real Madrid will face Atalanta while Juventus were drawn against FC Porto and Liverpool against RB Leipzig. Teams who finished the group stages on top of their respective groups will play the second of the round of 16 encounters at home. UCL 2020-21 Round of 16 Schedule: Here's Who is Playing Who After Champions League Draw.

Among the other teams, Manchester City were drawn against Borussia Monchengladbach, who made the UCL knockout stages for the first time in club’s history while defending UEFA Champions League (UCL) winners Bayern Munich will play Lazio in the last 16. Borussia Dortmund, who sacked coach Lucien Favre after the 1-5 defeat VfB Stuttgart, have been drawn against last season’s Europa League champions Sevilla.

Which tie are you most excited for? 🤩#UCLdraw | #UCL pic.twitter.com/M6AqMYTygN

Chelsea fans were left sad and worried after the club drew Atletico Madrid in the round of 16 while Barcelona fans hopes for a repeat 6-5 win over PSG when both these sides last faced in UCL round of 16. Here are some of the best reactions on Twitter from the UEFA Champions League round of 16 draw.

Manchester City Got it East After Drawing Borussia Monchengladbach?

Of course city got it easy, nothing surprising about that🥱#UCL #ManCity pic.twitter.com/CCDqnRgvht

#RealMadrid facing Atalanta in the #UCL round of 16!

On paper it's not a bad opponent for Madrid, but Los Blancos have shown lots of weaknesses against smaller sides this season, so it will be interesting to see how the team will fare against the current no. 8 in Seria A.

Neymar vs Messi in Barcelona vs PSG UCL Round of 16?

Barcelona Players After Drawing PSG in UCL Round of 16

The first legs of the UCL round of 16 matches will be played on February 16, 17, 23 and 24 while the return legs are scheduled to take place on March 9, 10, 16 and 17. Teams, who topped their respective groups and were seeded will play the first leg away from home and the crucial second leg at home.

(The above story first appeared on LatestLY on Dec 14, 2020 05:45 PM IST. For more news and updates on politics, world, sports, entertainment and lifestyle, log on to our website latestly.com).