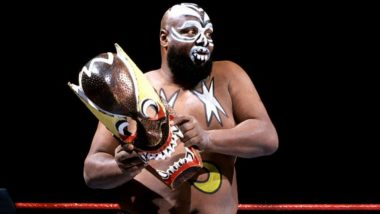 Under the frightening face paint of Kamala, the 6-foot-7, 380-pound Harris battled the greatest Superstars in sports-entertainment history, including Hulk Hogan, The Undertaker and Andre the Giant. He wrestled more than 400 matches over the course of several stretches with the WWE. Former WWE Superstar James Harris ‘Kamala’ Passes Away at 70, The Wrestling Legend Dies Due to COVID-19.

"He terrorised opponents and thrilled audiences in Mid-South, World Class Championship Wrestling, WCW and WWE until 2006," WWE said in a statement.

"WWE extends its condolences to Harris' family, friends and fans," it added.

Expressing remorse, WWE NXT General Manager William Regal said on Instagram: "My deepest condolences to the family of James Harris. I first saw him on TV when I was a child in the UK and at live shows as "The Missisippi Mauler" Big Jim Harris and then had the pleasure of being on shows with him in the US. A lovely man."

"RIP Kamala. I'm happy I had the opportunity to share a locker room with him many years ago. A giant of a gentleman. Godspeed sir," said Frankie Kazarian on social media.

"Another legend who deserved to be in WWE Hall of Fame and alive when that time came. An all around great talent and good guy that got over and stood out wherever he went. RIP to the great "Ugandan Giant" Kamala. His memory will live on forever," said Elijah Burke.

(The above story first appeared on LatestLY on Aug 10, 2020 11:11 AM IST. For more news and updates on politics, world, sports, entertainment and lifestyle, log on to our website latestly.com).