The 2022 Vivo Pro Kabaddi will be the ninth edition of the Pro Kabaddi League and the matches will be played across Bengaluru, Pune, and Hyderabad. The league has been underway since October 07, and a total of 12 teams are participating in the competition. 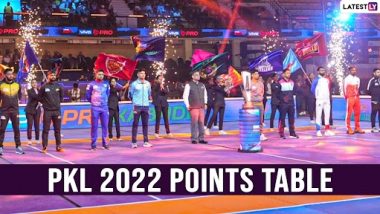 Haryana Steelers and Gujarat Giants picked up crucial wins in Pro Kabaddi League 2022 on Tuesday, November 29. While Haryana Steelers beat U Mumba, Gujarat Giants stunned table toppers Puneri Paltan. Despite the defeat, Puneri Paltan remained on top of the table with Jaipur Pink Panthers and Bengaluru Bulls at second and third. UP Yoddhas and Tamil Thalaivas are fourth and fifth on the table respectively. The inaugural season of the Pro Kabaddi League was held in 2014 and has taken place every year since with an exception of 2020 due to the Covid-19 Pandemic. The Pro Kabaddi was influenced by the popularity gained by the kabaddi tournament in the Asian Games. It uses a franchised-based model similar to the Indian Premier League (IPL), in which each team is owned by private companies which are responsible for the success and development of the team. Pro Kabaddi League 2022 Live Streaming Online on Disney+ Hotstar: Get Free Telecast Details of PKL Season 9 on TV in India.

The 2022 Vivo Pro Kabaddi will be the ninth edition of the Pro Kabaddi League and the matches will be played across Bengaluru, Pune, and Hyderabad. The league has been underway since October 07, and a total of 12 teams are participating in the competition, they will battle it out over 137 matches to be crowned as the 2022 Vivo Pro Kabaddi champions. The previous season of the Pro Kabaddi League saw Dabang Delhi as the champions. It was their first-ever PKL championship win and they defeated the three times PKL champions Patna Pirates to do so. Patna Pirates is the only team to win the title on more than one occasion and they won the three titles in three successive seasons in the third, fourth, and fifth seasons of the league. Following them are the Jaipur Pink Panthers, U Mumba, Bengaluru Bulls, Bengal Warriors, and Dabang Delhi with one title each. 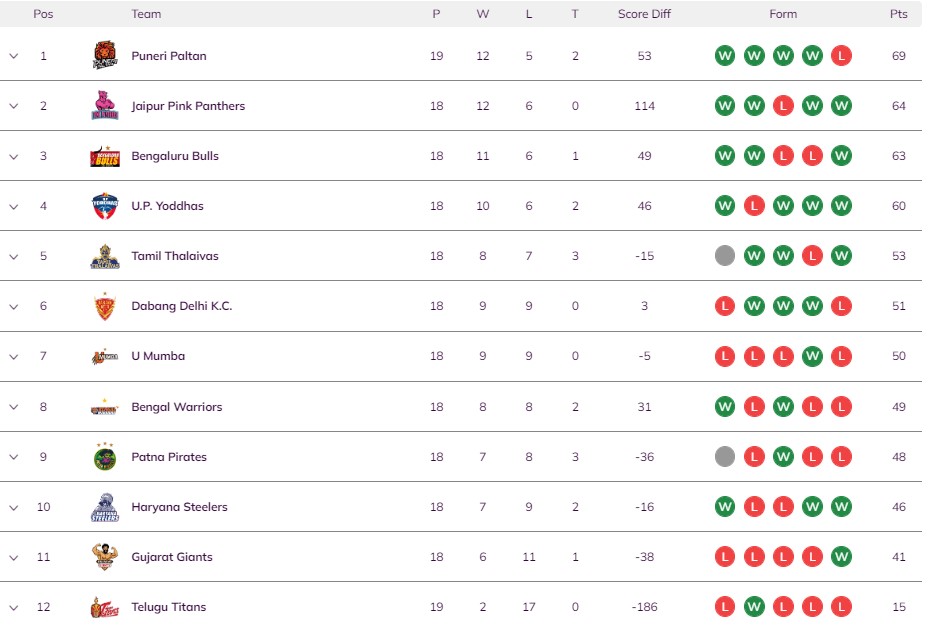 In the auction for the ninth season of the league, all the teams made major changes. The 2022 Vivo Pro Kabaddi will be unlike anything that is ever seen before. The Gujarat Giants will give everything to pass the threshold after failing to do so in two finals. Dabang Delhi's progress has been exceptional over the years and will try to defend their throne. It won't be easy as the three-time champions always present a tough battle and the Mumbai side is forever ready to beat the odds.

(The above story first appeared on LatestLY on Oct 08, 2022 09:23 PM IST. For more news and updates on politics, world, sports, entertainment and lifestyle, log on to our website latestly.com).