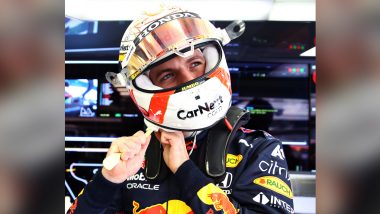 Max Verstappen was defeated by Lewis Hamilton during the last weekend at Spanish Grand Prix 2021 which was held in Barcelona. After the match, he posted a picture of his car and said that he needed a faster car in order to compete with Mercedes' Lewis Hamilton. In fact, even in the post-match presser, he said that he needs a faster car. Now, in the recent interview, he also took a jibe at his Red Bull teammate Sergio Perez. In an interview with one of the channels, Max further went on to say that he is fighting a lone battle. Lewis Hamilton Wins Spanish Grand Prix For Fifth Consecutive Time, Defeats Max Verstappen in Barcelona (Watch Video).

"I’m also just alone in the fight. They can easily make a second stop because there’s a gap behind them," he said during an interview. He was further pressed by the reporter as he went on to ask him if Perez needs to do more to which he said that they can't take the second stop. "It’s just towards the end who has the best tyres left. It’s like that though," he explained. His teammate Sergio Perez ranked on number five of the race.

(The above story first appeared on LatestLY on May 11, 2021 04:02 PM IST. For more news and updates on politics, world, sports, entertainment and lifestyle, log on to our website latestly.com).