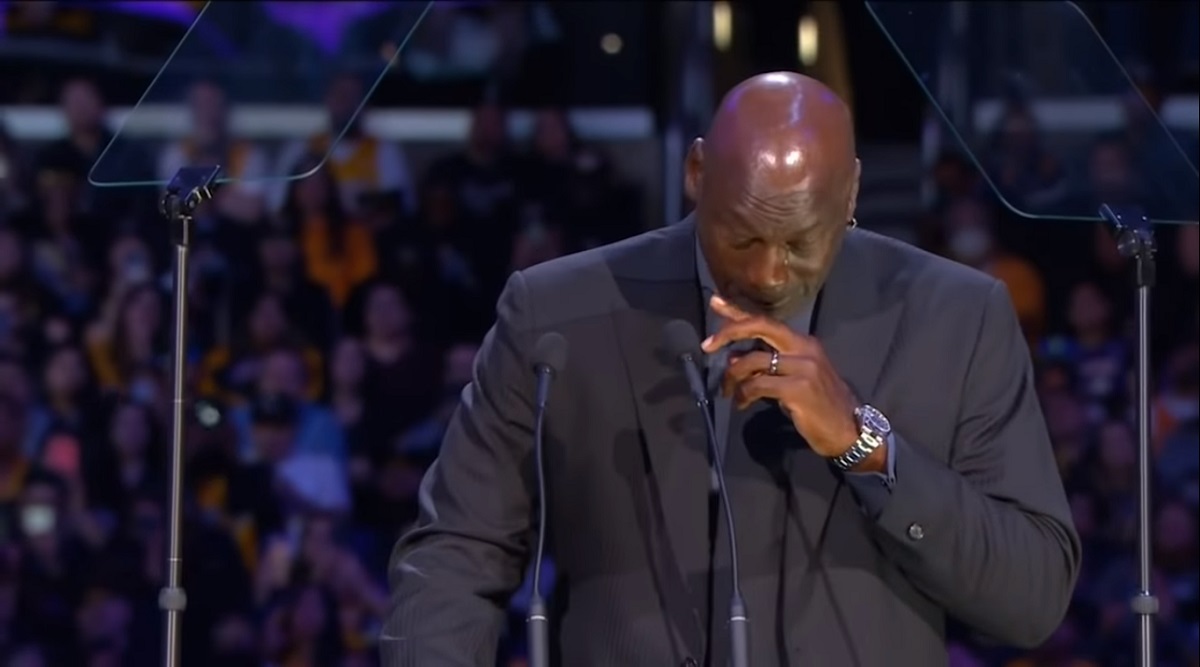 Los Angeles, February 25: A tearful Michael Jordan on Monday remembered his "little brother" Kobe Bryant at a star-filled memorial in Los Angeles for the basketball great and his daughter Gianna, who died with seven others in a helicopter crash last month. "When Kobe Bryant died, a piece of me died, and as I look in this arena, across the globe, a piece of you died," the NBA legend said with tears streaming down his face. "I promise you, from this day forward, I will live with the memories and knowing that I had a little brother," Jordan, widely regarded as the greatest player in history, added.

"I tried to help in every way I could. Please rest in peace, little brother." The public memorial -- dubbed "A Celebration of Life for Kobe and Gianna Bryant" -- was held at Staples Center, the arena where Bryant wowed fans for 17 years, and known as "the house that Kobe built." The 2/24 date carries special significance as it coincides with Bryant's jersey number -- "24" -- and Gianna's "2" jersey number. Fact Check: Vanessa Bryant, Kobe Bryant's Wife Did NOT Commit Suicide After His Death, Know Truth Behind The Fake News.

Another basketball legend, Shaquille O'Neal, also spoke at the ceremony, drawing cheers as he recalled the three NBA titles that he and Bryant won together. "Kobe and I have pushed one another to play some of the greatest basketball of all time and I am proud that no other team has accomplished the three-peat the Lakers have done since Shaq-and-the-Kobe Lakers did it," O’Neal said.

He also spoke of their well-known feuding, saying that even though "we fought, bantered or insulted each other with off-handed remarks," there was mutual respect between the pair. "Make no mistake," O'Neal said. "Folks thought we were on bad terms, (but) when the cameras were turned off, he and I would throw a wink at each other." Beyonce, backed by a choir, opened the ceremony with one of Bryant's favorite songs "XO," from her 2013 album, followed by "Halo."

"I'm here because I love Kobe," said the 70-time Grammy-nominated singer, who was dressed in a golden suit -- the color of the Los Angeles Lakers, Bryant's team for two decades.

'He Was my Everything'

Bryant's widow Vanessa paid a tearful tribute to her late 41-year-old husband and middle daughter, saying she could not fathom life without them and describing Bryant as "my everything." "God knew they couldn't be on this earth without each other," Bryant said in her first public remarks since the January 26 crash. "He had to bring them home together." She spoke of her heartbreak at not being able to watch Gianna -- who was 13 and one of four daughters the couple had -- grow up and missing important moments of her life.

"I won't be able to tell her how gorgeous she looks on her wedding day," she said through tears, receiving a standing ovation for the tribute. "I'll never get to see my baby girl walk down the aisle, have a father-daughter dance with her daddy." A visibly shaken Jimmy Kimmel, who officiated at the ceremony, said he saw Kobe and Gianna's faces and jersey numbers everywhere in Los Angeles and beyond. "All we can do is to be grateful for the time we had with them," said the late night talk show host and comedian.

Among other celebrities attending the memorial were filmmaker Spike Lee -- who was close friends with Bryant and directed a documentary on his life -- and rapper Snoop Dogg, an avid Lakers fan. Many of the fans lucky enough to nab one of the much sought-after 20,000 tickets for the memorial wore the gold and purple colors of the Lakers as they headed for the two-and-a-half hour ceremony being held amid tight security.

"Kobe meant everything for this city, for this team and for me," said Karen Sanchez, 41, as she waited with friends to enter the arena. "I watched him play from the beginning." Marcos Rojas, 23, another ticketholder, said Bryant's January 26 death near Los Angeles had been devastating to fans like him who worshipped the player.

"For me, it was like losing a friend," said Rojas, who wore a Lakers jersey with Kobe's number. "I always watched him playing with my friends," he told AFP. "I always picked Kobe to play in my video games. I couldn't leave home the day of his passing." Those attending the memorial were given a 24-page program with pictures of Bryant and his family as well as a pin and black T-shirt featuring images of Kobe and his daughter on the back.