Fact Check: Vanessa Bryant, Kobe Bryant's Wife Did NOT Commit Suicide After His Death, Know Truth Behind The Fake News

Certain fake reports about Kobe Bryant's wife Vanessa committing suicide are doing rounds on the internet. But these are absolutely fake video reports with no truth to it. To make it look convincing the video has been packaged like a BBC report with the first frame reading R.I.P Vanessa Bryant 1982-2020. 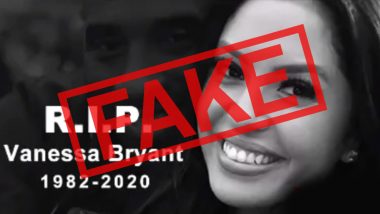 Football legend Kobe Bryant's death along with his daughter Gianna in a helicopter crash came as a shock to everyone. The NBA star and his daughter were killed in a helicopter crash on January 26, 2020, near California. While it is definitely a hard time for the family, certain fake reports about Kobe Bryant's wife Vanessa committing suicide are doing rounds on the internet. But these are absolutely fake video reports with no truth to it. To make it look convincing the video has been packaged like a BBC report with the first frame reading R.I.P Vanessa Bryant 1982-2020. The post was also shared on other social media platforms but it's fake news. Vanessa Bryant 'Can’t Process' Kobe and Gigi's Deaths; Shares Real Feelings in a Heart-Breaking Instagram Post (Watch Video).

A video has been shared on YouTube which shows a BBC News logo at the bottom right. It begins with a black and white picture of Vanessa Bryant and reads R.I.P. But after a few seconds, there are unrelated frames which point that it is not a BBC report but a fake video made to capitalize on the news of NBA legend's death. A screenshot that's being shared on Facebook says it's from the website Network-Channel-Wereblogs.com. The headline reads, "VANESSA '.BRYANT.' DlED of SUlClDE DEPRESSl0N Attach this M0RNING.. [BBCNEWS]" But if you look closely it uses wrong letters in the spellings too. Fake news buster Snopes.com has also called out to this fake report.

This video has been going viral from the first week of February but it is done for just capitalizing on the tragic event. Vanessa Bryant is bereaved and trying to cope up with the sudden demise of her husband and daughter. On Valentine's Day, she made an emotional post on Instagram with their picture and wrote, "To my forever Valentine, I love you so much."

She is alive and dealing with the loss of her family. No one can probably understand the pain she must be going through and such false reports do no good. She had posted a long note on Instagram talking about seeking comfort in knowing how much people across the world loved Kobe. So if you come across this fake news report and video make sure you do not pass it on but instead tell people that is a rumour.

It is a fake report.

(The above story first appeared on LatestLY on Feb 18, 2020 12:48 PM IST. For more news and updates on politics, world, sports, entertainment and lifestyle, log on to our website latestly.com).