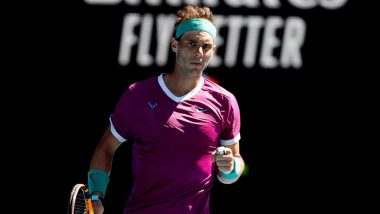 Australian Open 2022 had the quarterfinals game on day 9 of the tournament Down Under. Day 9 witnessed the likes of Rafael Nadal and others in action. But Nadal's quarterfinal match against Denis Shapovalov was quite a headliner game that grabbed all the eyeballs. The Spaniard fought hard for four hours to make way into the semi-finals of the Australian Open 2022. He stumbled a bit in the third and fourth set but came back ferociously only to make way into the Australian Open semi-finals for the seventh time in his career. Australia Open 2022: India’s Challenge Ends After Sania Mirza and Rajeev Ram Lose in Quarter Finals.

After winning the game, Nadal said that this was quite a tough day for him. "I was a little lucky at the beginning of the fifth. At the beginning of the match I was playing great, then I know how difficult it is to play against a player like Denis.” Ashleigh Barty was also in action on Day 9 and secured a win in straight sets. Now, let's quickly have a look at the highlights of the game below.

#This is the seventh time that Nadal has made his way into the semifinals of the Australian Open.

#Ashleigh Barty went on to defeat Jessica Pegula 6-2, 6-0 at the Rod Laver Arena. The match went on for about 63 minutes.

#Madison Keys was labelled as the underdog as she took on  Barbora Krejcikova. But the USA stat stunned the fourth seed 6-3, 6-2.

#This is the first time that Keys has made hey way into the semi-finals of the tournament.

#Nick Kyrgios and  Thanasi Kokkinakis downed sixth seeds Tim Puetz and Michael Venus 7-5, 3-6, 6-3 to reach the semi-finals of the tournament.

#Meanwhile, Sania Mirza and her Mixed doubles partner Rajeev Ram crashed out of the Australian Open 2022 after losing to Jasen Kubler and Jaimee Fourlis 4-6, 6-7.

It would be interesting to see what day 10 brings for the fans and the followers. Stay tuned to this space as we shall bring to you the live streaming details of each of these matches.

(The above story first appeared on LatestLY on Jan 25, 2022 09:10 PM IST. For more news and updates on politics, world, sports, entertainment and lifestyle, log on to our website latestly.com).