India's campaign at the 2022 Australian Open came to an end after Sania Mirza and her American partner Rajeev Ram lost to local pair of Jaimee Fourlis and Jason Kubler in the mixed doubles quarterfinal match, here on Tuesday. 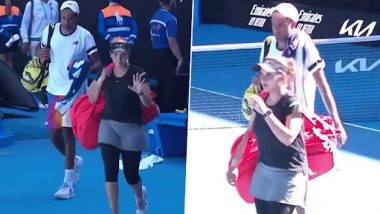 Melbourne, January 25: India's campaign at the 2022 Australian Open came to an end after Sania Mirza and her American partner Rajeev Ram lost to local pair of Jaimee Fourlis and Jason Kubler in the mixed doubles quarterfinal match, here on Tuesday. The unseeded duo of Mirza and Ram lost the match 4-6, 6-7 to Fourlis and Kubler in one hour 30 minutes.

The Indo-American pair got broken in the first game and gave away two break points in the second to go 2-0 down in the first set. The experienced duo then snatched the momentum back to take the next three games with Sania using her topspin lob to good effect. However, Sania and Ram converted just one of the eight break points and allowed Fourlis and Kubler to win the first set in 40 minutes. Australian Open 2022: Denis Shapovalov Hits Out at Chair Umpire During Quarterfinal Clash Against Rafael Nadal, Says, ‘You Guys Are All Corrupt’ (Watch Video).

Thereafter, Sania and Rajeev came back roaring in the second set, racing to a 4-1 lead. But, Fourlis and Kubler won the next three games to level the score at 4-4 in the second round. Mirza and Ram lost steam against the younger pair and consequently lost the set and match in the tie-breaker.

Earlier, Sania made a first-round exit from the women's doubles with her Ukrainian partner Nadiia Kichenok while Rohan Bopanna had also lost the opening round matches in both men's and mixed doubles. No Indian player had made it past the qualifying round in the singles main draw.

The 35-year old Sania, who is playing her last season, had won the Australian Open mixed doubles title in 2009 with Mahesh Bhupathi. She also won a women's doubles title with Martina Hingis in 2016.

(The above story first appeared on LatestLY on Jan 25, 2022 04:30 PM IST. For more news and updates on politics, world, sports, entertainment and lifestyle, log on to our website latestly.com).