The 23-year old, while taking to Twitter made this announcement where she said that questioning players after defeats was just like 'kicking a person while they’re down. She further added that the fines collected from players who refuse to talk to the press, could go towards a mental health charity. 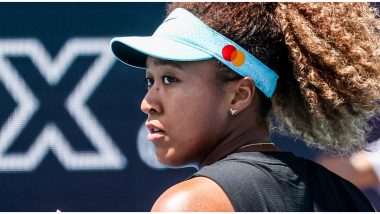 Young tennis star Naomi Osaka said on Wednesday that she would not be taking questions from the media at the French Open this year, stating that such press conferences puts pressure on the mental health of players. The 23-year old, while taking to Twitter made this announcement. “I’m writing this to say I’m not going to do any press during Roland Garros,” her statement read. “I’ve often felt that people have no regard for athletes mental health and this rings true whenever I see a press conference or partake in one," she added. French Open 2021: Naomi Osaka Shares a Funny Video of Herself Falling While Sweating it Out on the Court

Osaka said that questioning players after defeats was just like 'kicking a person while they’re down.' The four-time grand slam champion further stated there was 'nothing personal' against the competition in general. Many tennis competitions have made it mandatory for players to talk to the media after every match. If they refuse to do so, they are fined.

In January, American player Christian Harrison was made to pay a fine of $3,000 by the ATP after he had refused to participate in a compulsory on-court interview at the Delray Beach Open. She also said that tournaments would rethink this approach with regard to press conferences.  Naomi Osaka Becomes Highest Earning Female Athlete in History With $55.2 Million in the Last 12 Months

The Japanese player also hoped that these fines would go to a mental health charity. Osaka also went on to tweet a video of former Seattle Seahawks running back Marshawn Lynch saying at a press-conference in 2015, “I’m just here so I won’t get fined."

In the past, Osaka had used the press conference to highlight issues of police violence and racism. The French Open tournament would end on June 13 with the qualifiers being played currently.

(The above story first appeared on LatestLY on May 27, 2021 01:47 PM IST. For more news and updates on politics, world, sports, entertainment and lifestyle, log on to our website latestly.com).