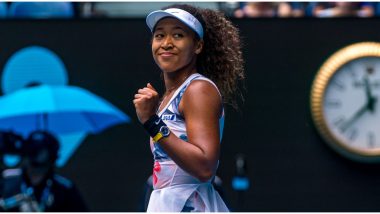 Naomi Osaka, a promising tennis star in the last few years and one of the most marketable global athletes, is reported to have earned a whopping amount of $55.2 million in the last 12 months.  Out of that amount, only $5.2 came from prize money. The rest was all off the court earnings. French Open 2021 Live Streaming Online & Time in IST: How To Get Live Telecast Of This Year's Roland Garros on TV in India?

A stunning US Open victory over Serena Williams in 2018 made the world sit up take notice of Naomi Osaka in 2018. Months later, a second grand slam in Australia followed and that was just the beginning. Other than maintaining consistency in the tennis court with two more grand slams, Osaka grabbed the headlines for other reasons as well. She boldly stood up for raising awareness on racial justice, sporting masks with names of the black shooting victims and also by even pulling out of an event in Cincinnati.

From a purely marketing point of view, such moves definitely indicate that the athlete is on a downward spiral but that wasn't the case with Osaka. Instead, she ended up earning $55.2 million, the highest by any female athlete in history. Out of that amount, only $5.2 came from prize money. The rest was all off the court earnings, through endorsements and sponsorships.

“It used to be that you open your mouth too loudly and nobody wants to touch you,” Bob Dorfman, a sports marketing expert at Baker Street Advertising said, adding, “now, everybody talks about brands taking a stand. Osaka stands up for what she believes in and comes across as very real.”

Hailing from a Japanese-Haitian origin also has become a factor considered by over six Japanese companies to sponsor her. The Tokyo Olympics, which would begin on July 23 this year has added to market value as well with ANA, Google and Nissin being both official Olympic supporters and Osaka's sponsors. Naomi Osaka Shares Adorable Picture With Her Mother Tamaki on Mother’s Day 2021

When it came to endorsements, her $50 million earnings were only behind active athletes like Roger Federer, LeBron James and Tiger Woods.

The 23-year old tennis star also made investments in women by buying a stake the NWSL's North Carolina Courage. Not just this but she has also encouraged her sponsors to invest in the league. As a result, Mastercard, one of her endorsement partners signed a multi-year deal and would be an official sponsor of the league at the beginning of the 2021 season.

On top of all of this, Osaka herself is a young entrepreneur, launching her her first swimwear collection in collaboration with Los Angeles-based Frankies Bikinis. She also has her own line of skincare products named Kinlò, focusing on protection of coloured skin. It was also recently reported that she and Nike are in collaboration on a signature apparel collection which includes t-shirts, hoodies, shorts, and a mesh bodysuit. The four-time Grand Slam winner would look forward to dominating the court in the French Open this week.

(The above story first appeared on LatestLY on May 26, 2021 10:40 AM IST. For more news and updates on politics, world, sports, entertainment and lifestyle, log on to our website latestly.com).