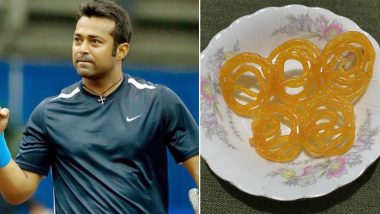 Summer Olympics 2020, which were scheduled to take place in Tokyo later in the year, might have been postponed by a year due to the coronavirus pandemic, but Indian tennis icon Leander Paes is still on with the Olympics fever. The 47-year-old legendary tennis star on Sunday (August 2, 2020), took to his social media to share a unique photo of ‘Olympians breakfast’ with his millions of fans. Leander Paes Asks Fans to Name Their Favourite Victory of Him, Former Partner Mahesh Bhupathi Comes Up With One.

Leander Paes took to his twitter account as he recently posted an image of ‘breakfast’ for Olympic players. In the photo shared by the tennis icon, the 47-year-old could be seen enjoying his Sunday by having Jalebis, which were adjoined in such a way that they resembled the iconic Olympic Logo (the five interlocking rings). ‘Breakfast of Olympians’ Paes captioned his post. Leander Paes Clubs Video of Him and Mahesh Bhupathi Playing Tennis With Frying Pan, Shares on Social Media.

Leander Paes has been one of the most successful tennis players from Indian at the Olympic events. He made his debut at the games during the 1992 Summer Olympics in Barcelona, Spain. The 47-year-old won the Bronze medal at the 1996 Atalanta Olympic Games. He competed in consecutive Olympics from 1992 to 2016, making him the first Indian and only tennis player to compete at seven Olympic Games.

Speaking of the Tokyo Olympics, the games were originally planned to take place between July 24 and August 9, 2020 but were rescheduled to July 23 to August 8, 2021, due to the coronavirus pandemic. This is will be the second time that Japan – specifically Tokyo – will be hosting the Summer Games, first being in 1969.

(The above story first appeared on LatestLY on Aug 02, 2020 03:20 PM IST. For more news and updates on politics, world, sports, entertainment and lifestyle, log on to our website latestly.com).