WWE Crown Jewel 2019 indeed can be termed as one of the best event of wrestling in 2019. WWE Universe now has The Fiend Bray Wyatt as the New Universal Champion as he defeated Seth Rollins in a falls count anywhere match. The match had stipulation that by no mean it will stop. 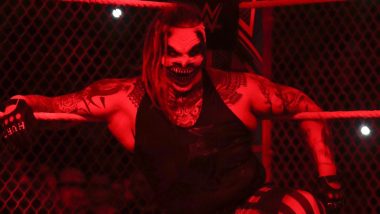 WWE Crown Jewel 2019 indeed can be termed as one of the best event of wrestling in 2019. WWE Universe now has The Fiend Bray Wyatt as the New Universal Champion as he defeated Seth Rollins in a falls count anywhere match. The match had stipulation that by no mean it will stop. The recently-concluded event at Riyadh in Saudi Arabia which was held on Oct 31, 2019 also saw Brock Lesnar retain his WWE Championship title as he demolishes Cain Velasquez. Meanwhile, you have arrived at the right platform, if you looking for results and highlights of WWE Crown Jewel 2019. WWE Crown Jewel 2019: Brock Lesnar Beat Cain Velasquez to Retain Title, Rey Mysterio Rescues MMA Star From Beast Incarnate’s Assault.

Seth Rollins gave his best and delivered multiple stomp heads on Bray Wyatt, however it couldn't be enough to give him victory. In the end we saw The Fiend deliver mandible claws and finally end the BeastSlayer title reign by giving Sister Abigail near the rampage area. Speaking about Brock Lesnar match it finished very quickly as Cain Velasquez did not put up the fight which was expected from him. Velasquez was trapped in a submission move by Lesnar which forced him to tap-out. Rey Mysterio came in rescue of Cain Velasquez to protect him from Lesnar's assault after the match and delivered Beast Incarnate with chair shots after the match. WWE Crown Jewel 2019: Tyson Fury Defeats Braun Strowman by Count Out in His Debut Match.

Braun Strowman lost to Tyson Fury by count-out. The Gypsy King delivered a knock out punch to Monster Among Men to throw him out of the ring. Strowman wasn't able to make it to the ring at the count of 10. Some other exciting matches were Team Hogan vs Team Flair and Natalya vs Lacey Evans. Queen of Hart won first ever women match in Saudi Arabia to create history. Speaking about Team Hogan vs Team Flair, Roman Reigns speared Randy Orton in the end which resulted in Hulk Hogan's team victory.  AJ Styles defeated Humberto Carrillo to retain his United States Championship belt. The OC won Tag Team World Cup trophy. WWE Crown Jewel 2019: Natalya Beat Lacey Evans to Win First Ever Women Wrestling Match in Saudi Arabia.

The Fiend Bray Wyatt is The New Champ

Happy Halloween For The Fiend

The OC Had a Good Evening in Riyadh

Best wasn’t good enough. I already knew @KarlAndersonWWE @LukeGallowsWWE were the best tag team in the world. Tonight made it “official.”

And now you ALL know who the best champion in @WWE is. https://t.co/c3sxNkhhMa

Glimpse From Natalya vs Lacey Evans

Now it will be interesting to see The Fiend Bray Wyatt at The Miz TV in the uocoming episode of SmackDown. We will also see how Brock Lesnar's respond to Rey Mysterio's wrath at Crown Jewel 2019. Stay tuned to LatestLY for more updates and news on WWE.

(The above story first appeared on LatestLY on Nov 01, 2019 03:24 AM IST. For more news and updates on politics, world, sports, entertainment and lifestyle, log on to our website latestly.com).