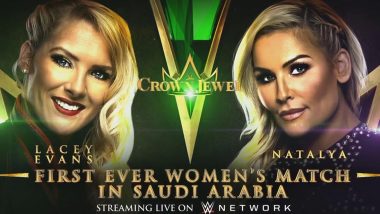 Natalya defeated Lacey Evans at WWE Crown Jewel 2019 to win first ever women wrestling match in Saudi Arabia. It was indeed a historic moment for WWE to have 1st ever women wrestling match in Saudi Arabia. Natalya was at her best in the match as The Queen of Hart left no stone unturned  against Lacey Evans. Natalya won the match by giving submission move to Lacey Evans and got emotional after her victory. WWE Crown Jewel 2019: Tyson Fury Defeats Braun Strowman by Count Out in His Debut Match.

The QUEEN OF HARTS does it again.

Now we are left with Seth Rollins vs The Fiend Bray Wyatt contest for Universal Championship which will be a falls count anywhere match. Stay tuned with LatestLY for more updates and news from WWE Crown Jewel 2019.

(The above story first appeared on LatestLY on Nov 01, 2019 01:14 AM IST. For more news and updates on politics, world, sports, entertainment and lifestyle, log on to our website latestly.com).