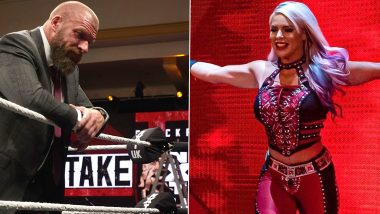 2. Danny Burch & Killian Dian Not to Feature on SmackDown This Week

Previously there were reports that NXT stars Danny Burch and Killian Dian will feature on the SmackDown episode of Aug 7, 2020. However, as per the latest report of Fightful Respect, there are last-minute changes made for taping the upcoming episode of SmackDown, where they have dropped the plan to feature these two talents from NXT. Initially, they were planned to join King Baron Corbin's team and assault Matt Riddle.

Dana Brooke is not to be seen in action for many days. However, she has been training well these days to get ready for the fight soon. In her recent tweet, she has posted a video addressing to Raw Underground's boss Shane McMahon about her wish to take a shot at Raw Underground. Dana says in her tweet that she is ready for Underground, don't mess with her.

What you think @shanemcmahon !? Im ready for #RawUnderground !!! Don’t mess with me !!! Who wants some !? @WWE #wwe pic.twitter.com/YI3ecrkn6j

Lana is currently not in action these days on Raw. She was last involved in a storyline with Boby Lashley, where the All-Mighty demanded asked her for a divorce. Lana's real-life husband Rusev has been released from WWE under COVID-19 budget cut scheme. Rusev also tested positive for COVID-19, however, he is now out of danger and absolutely fine. Lana recently speaks about her experience for COVID-19 testing at WWE. Check out the video below.

5. Liv Morgan Not Sure About Reuniting With Ruby Riot

Liv Morgan is not so sure about reuniting with Ruby Riott as The Riott Squad as of now if we consider her latest tweet. This past week on RAW Morgan and Riott team up to defeat The IIconics following an emotional appearance on The Kevin Owens Show, where Riott apologized and talked about their history. Check out Morgan's reply to the tweet by The Bump's which said Riot is able to win her friend's trust back.

She is WORKING on GAINING my trust again.. no offense Rue 🥴 https://t.co/b0FaJKWRHn

Fans will now look forward to the upcoming episode of WWE SmackDown where 'The Fiend' Bray Wyatt will speak about his action last week where he gave mandible claws to Alexa Bliss. Also, this weekend there are chances of Braun Strowman vs Bray Wyatt Universal title match getting booked for SummerSlam 2020.

(The above story first appeared on LatestLY on Aug 07, 2020 09:01 AM IST. For more news and updates on politics, world, sports, entertainment and lifestyle, log on to our website latestly.com).