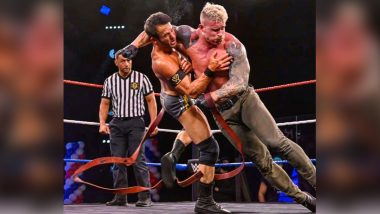 WWE these days is trying different methods and ways to increase their viewership by introducing a new concept, faction and many other types of unique fights. The biggest challenge for WWE these days is to operate without the presence of big names like Roman Reigns and Brock Lesnar, also they are restricted to tape shows only at Performance Center in Orlando, Florida. Meanwhile, let us take a look at the top 5 WWE news which you might be interested to know. This includes Dexter Lumis chances of getting pulled from NXT TakeOver XXX to WWE draft taking place in October 2020. WWE News: From Austin Theory’s Suspension to Matt Riddle's Reaction on Raw Underground, Here Are Five Interesting Updates You Need to Know.

CM Punk appreciates the concept of Raw Underground introduced by Shane McMahon this past week on Monday Night Raw. Raw Underground is a bloodsport type segment where the rules are similar to a fight club. CM Punk believes that even women wrestlers should become part of Raw Underground, he especially mentioned about Nia Jax. CM Punk said these things Punk joined on Watch Along featuring SummerSlam 1992, which aired on FS1.

Maria Kanellis and her husband Mike Kanellis has been released from WWE under the COVID-19 budget cut plan. Maria was a famous wrestler of her time as she had her unique style and charisma. She recently slammed WWE through a tweet, in which she mentioned that WWE doesn't want to build new stars.

WWE doesnt want to build new stars, they want to spike the ratings for a couple weeks to keep the investors/networks happy. What WWE doesn’t seem to get, is ratings improve when people care about the story/stars. Invest in talent, spend the time building stars, stop the laziness.

Dominik Mysterio has grown up looking at his father's Rey Mysterio legacy. Dominik used to always accompany his father near ringside audience to support his father. WWE has recently shared a post on Instagram, where Dominik can be seen near ring at SummerSlam 2005 and the same small boy after a matter of fifteen years will feature in a big fight against Seth Rollins at SummerSlam 2020. WWE is indeed giving a good start to Dominik Mysterio career by putting him in a debut match against star wrestler like Rollins.

@dominik_35 watched #SummerSlam 2005 at ringside. 15 years later, he competes in his first match

The WWE draft takes place every year where some superstars from Raw and SmackDown are reshuffled. This year it was scheduled to take place somewhere in August, however, a report from Fightful Select has confirmed that due to the ongoing coronavirus pandemic the draft will take place somewhere in October. Last year the draft took place just before SmackDown was moved to Fox.

WWE fans will now look forward to an exciting episode of SmackDown where superstars like Matt Riddle, AJ Styles, King Baron Corbin will be in action. However, it will be interesting to see what The Fiend Bray Wyatt has to say after his attack on Alexa Bliss on the last week's episode of SmackDown.

(The above story first appeared on LatestLY on Aug 06, 2020 09:01 AM IST. For more news and updates on politics, world, sports, entertainment and lifestyle, log on to our website latestly.com).