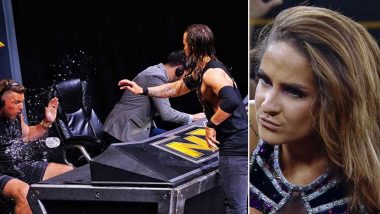 Adam Cole was ringside during Imperium vs The Undisputed Era NXT Tag Team title match. It was at that time the verbal spat started between Cole and Pat McAfee took place near the commentary box. This distracted the attention of Bobby Fish and Kyle O'Reilly, which then allowed Imperium to drop Fish with the European Bomb to retain their titles. Even Shawn Michael and Triple H tried to split their heated debate, however, McAfee out of nowhere hit Cole with a massive punt, which left him all unconscious. WWE Raw Aug 3, 2020 Results and Highlights: Seth Rollins to Face Dominik Mysterio at SummerSlam; Apollo Crews Defeats MVP to Retain United States Title.

(The above story first appeared on LatestLY on Aug 06, 2020 02:06 PM IST. For more news and updates on politics, world, sports, entertainment and lifestyle, log on to our website latestly.com).