We might be a few days away from WWE SummerSlam 2020 which is scheduled to take place on August 23, 2020, but fans and wrestlers have already created hype for it. After WrestleMania, it is the second biggest pay per view event of WWE. Intercontinental Champion AJ Styles recently tweeted about SummerSlam and his future plans in WWE. 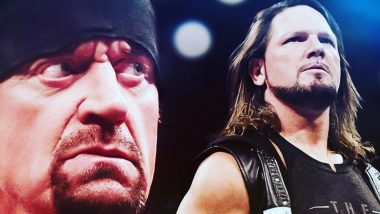 We might be a few days away from WWE SummerSlam 2020 which is scheduled to take place on August 23, 2020, but fans and wrestlers have already created hype for it. After WrestleMania, it is the second biggest pay per view event of WWE. Intercontinental Champion AJ Styles recently tweeted about SummerSlam and his future plans in WWE. The Phenomenal One has challenged The Undertaker to 'Loser Leaves Town' match at SummerSlam 2020. Scroll down below to read more interesting WWE News, the one being about Monday Night Raw which has recorded the lowest third hour viewership in history. WWE News: From Dominik Mysterio Attacking Seth Rollins on Raw to Kairi Sane’s Thank You Message For Fans, Here Are Five Interesting Updates to Watch Out For.

The Phenomenal One lost to The Undertaker at WrestleMania 36 in the boneyard match. The Deadman recently announced his retirement from WWE with WrestleMania record of 25-2. However, the Phenom did mention that if Vince McMahon needs him, he will be there for him. Meanwhile, AJ Styles wants to settle the score with The Undertaker as he feels that he has the ammunition needed to get his WrestleMania 36 rematch in August at SummerSlam. Styles while speaking to BT Sport, said that The Undertaker has never been the Intercontinental Champion, he is ready to put it on the line against him and if The Deadman beats him, he will leave WWE forever.

If that's the way it ends for @AJStylesOrg we wouldn't be mad 👀 pic.twitter.com/ZWN7EsHCPI

Mark Henry works backstage for WWE and last week he was present at the Performance Center in Orlando where the show tapings are done. This week's episode of Raw on July 27, 2020, was taped last week at Performance Center. Mark Henry was also available at Performance Center and the original plan was to revamp the Nation of Domination with The Hurt Business this week on Raw, that's the reason why Ron Simmons was also bought back. However, the segment for Nation of Domination was nixed, instead, Mark Henry was seen speaking with Ruby Riot and Drew McIntyre at the backstage area during the recently-concluded episode of Raw. WWE Raw July 27, 2020 Results and Highlights: Randy Orton Challenges Drew McIntyre For Title Showdown at SummerSlam; Sasha Banks Defeats Asuka by Count-Out to Become Women’s Champion (View Pics)

WWE Raw July 27, 2020 episode drew an average of 1.617 million viewers on the USA Network, according to Showbuzz Daily. This is down from 0.7% from last week's 1.628 million viewers which came to Raw episode after Extreme Rules 2020. For this week's show, the first hour drew 1.699 million viewers, the second hour drew 1.688 million viewers and the final hour drew 1.463 million viewers. This is the lowest ' third-hour' viewership in the history of Raw. WWE SmackDown July 24, 2020 Results and Highlights: Bray Wyatt Returns With FireFly Fun House, Jeff Hardy Defeats Sheamus in Bar Fight (View Pics)

4. Sting Says Fans Will Remember Him For Innovation

WWE Hall of Famer Sting while speaking with former WWE consultant and Disney executive, Rick Bassman on Talking Tough podcast shared his wrestling experience. Sting revealed in the podcast that fans will remember his gear, staying in shape, being believable, trying to always be better, always be innovative and creative. He further said that there was something about his gimmick that fans loved. Sting also mentioned that his feud against Big Van Vader aka Leon White was the best in his career. Currently, Sting is not under the contract with WWE.

5. WWE SummerSlam to Take Place in Boat or Beach

WWE has cancelled the plans to have SummerSlam 2020 at TD Garden in Boston due to the ongoing coronavirus pandemic. WWE has also announced refund of the ticket money for the same from the original point of purchase. As per the reports by PWInsider, WWE will conduct SummerSlam 2020 at an outdoor location, which can be a boat or a beach. If not the whole card, but at least the top matches of SummerSlam can be organised outside Performance Center.

Fans will now look forward to the upcoming episode of WWE SmackDown where Bayley will defend her title against Nikki Cross. Stay tuned with LatestLY for more updates and news from WWE.

(The above story first appeared on LatestLY on Jul 30, 2020 09:02 AM IST. For more news and updates on politics, world, sports, entertainment and lifestyle, log on to our website latestly.com).