Software major Adobe has laid off some 100 employees from its sales team amid the rough global macroeconomic conditions. 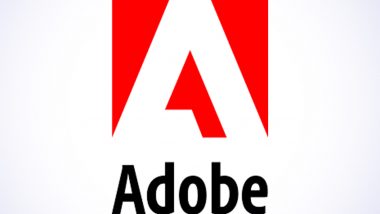 San Francisco, Dec 7: Software major Adobe has laid off some 100 employees from its sales team amid the rough global macroeconomic conditions.

In a statement, Adobe said that the company "shifted some employees to positions that support critical initiatives" and removed "a small number" of other jobs. Morgan Stanley Layoffs: Global Investment Advisory Firm Lays Off About 1,600 Employees Amid Global Economic Meltdown

"Adobe is not doing company-wide layoffs and we are still hiring for critical roles," the software major said in a statement. Alphabet Layoffs: Google’s Parent ‘Prepares’ To Fire 10,000 Employees

Although the size of workforce reduction at Adobe is not the same in comparison to Big Tech, the move is seen as an indication of the global meltdown now affecting the companies at a deeper level.

Bloomberg was first to report about Adobe layoffs.

Adobe had a record quarter in Q3, achieving $4.43 billion in revenue, which represents 15 per cent year-over-year growth.

"In this digital-first world, Adobe Creative Cloud, Document Cloud and Experience Cloud have become even more mission-critical to an increasingly wide range of customers," Adobe CEO Shantanu Narayen had said.

Adobe shares went up after the software maker issued guidance for the next fiscal year that fell short of expectations, but blamed some of the shortfall on a stronger dollar and unfavourable foreign exchange rates.

The software major will, in fact, increase headcount by a lower percentage than it has in the past few years, Narayen told analysts at the 'Adobe Max 2022' conference in the US in October.

"Adobe's continued success in this uncertain macroeconomic environment underscores that our solutions are mission-critical to a growing universe of customers," according to the CEO.

(The above story first appeared on LatestLY on Dec 07, 2022 05:11 PM IST. For more news and updates on politics, world, sports, entertainment and lifestyle, log on to our website latestly.com).