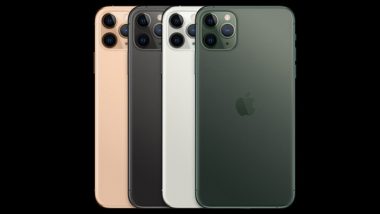 New Delhi, July 24: Commerce and Industry Minister Piyush Goyal on Friday said Apple has started manufacturing iPhone 11 in India, describing it as "significant boost" to the Modi government's 'Make in India' initiative. Piyush Goyal also shared a news report which said Apple has started making its flagship iPhone 11 at the Foxconn plant near Chennai. The report also said Apple may consider exporting the India-made iPhone 11, reducing its dependence on China. Apple iPhone 12 Series May Have Smaller Batteries Compared to iPhone 11.

"Significant boost to Make in India! Apple has started manufacturing iPhone 11 in India, bringing a top-of-the-line model for the first time in the country," Goyal tweeted. The manufacturing of iPhone in India will help Apple avoid a 20 percent tax that it is needed to pay for importing the handset from its manufacturing facilities outside the country. This may reduce the price of iPhone in India as well. Apple iPhone 12 Likely to Feature High-End Rear Cameras to Improve Image Quality.

According to a report, few "Assembled in India" iPhones have reached Apple stores in the country. However, there is no price cut and the MRP on locally assembled iPhone 11s remains the same as earlier. Apple is already making two handsets in India - iPhone XR at the Foxconn plant near Chennai and the iPhone 7 at the Wistron factory near Bengaluru.

Significant boost to Make in India!

Apple has started manufacturing iPhone 11 in India, bringing a top-of-the-line model for the first time in the country.https://t.co/yjmKYeFCpL

The California-based company also plans to start manufacturing of the new iPhone SE at the Wistron factory. Original iPhone SE and iPhone 6s were assembled by Wistron but those were discontinued in 2019. Apple has Foxconn, Wistron, and Pegatron as the suppliers for its iPhone models and they are investing in India which already has over 50 crore smartphone users. Foxconn is also planning to invest up to $1 billion to expand its India operations. Pegatron, the second-largest iPhone assembler after Foxconn, is also reportedly planning to invest in the country.

(The above story first appeared on LatestLY on Jul 24, 2020 05:42 PM IST. For more news and updates on politics, world, sports, entertainment and lifestyle, log on to our website latestly.com).