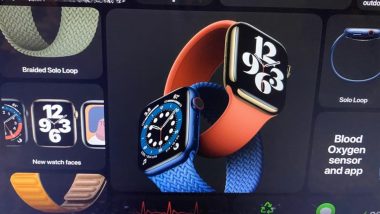 Oxygen saturation, or SpO2, represents the percentage of oxygen being carried by red blood cells from the lungs to the rest of the body, and indicates how well this oxygenated blood is being delivered throughout the body.

Apple Watch Series 6 houses a faster S6 System in Package (SiP) and next-generation always-on altimeter, along with its most colourful lineup yet, featuring a beautiful palette of new case finishes and bands.

The Blood Oxygen sensor employs four clusters of green, red, and infrared LEDs, along with the four photodiodes on the back crystal of Apple Watch, to measure light reflected back from blood.

Apple Watch then uses an advanced custom algorithm built into the Blood Oxygen app, which is designed to measure blood oxygen between 70 percent and 100 percent. Pegatron, Apple's Second-Largest Contract Manufacturer, Eyes Tamil Nadu to Set Up Its Manufacturing Unit Under PLI Scheme.

Apple said it is joining forces with researchers to conduct three health studies that include using Apple Watch to explore how blood oxygen levels can be used in future health applications.

Apple Watch Series 6 uses a new dual-core processor based on A13 Bionic in iPhone 11, the upgraded S6 SiP runs up to 20 per cent faster, allowing apps to also launch 20 percent faster, while maintaining the same all-day 18-hour battery life.

(The above story first appeared on LatestLY on Sep 15, 2020 11:51 PM IST. For more news and updates on politics, world, sports, entertainment and lifestyle, log on to our website latestly.com).