The interested fans can immediately pre-order the Call of Duty: Modern Warfare Multiplayer game to get early access for the beta version. The company is offering two exclusive beta dates wherein PlayStation 4 users can get early access to the game on September 12-13. 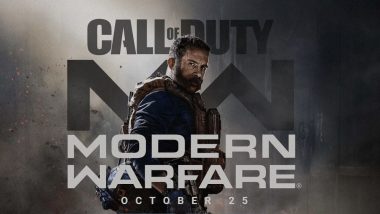 Rejoice Gamers as Call of Duty: Modern Warfare ​is coming! Activision and Infinity Ward officially released the trailer for the upcoming game, giving out the most extensive look at the multiplayer modes that will be offered in the game. To be available on PlayStation 4, Xbox One and PCs, the Call of Duty: Modern Warfare is slated for worldwide release on October 25, 2019. PUBG Lite Becomes Top Free Game in Google Play Store With 10 Million Downloads in India: Report.

Technically, the game – Call of Duty: Modern Warfare is a reboot of the fourth game in the series that focuses on the concept of a war game set in the modern times envisioning the current political scenarios. The upcoming game will feature plenty of new things such as new weapons, Gunfight experiences, six-versus-six multiplayer gameplay and much more. The Call of Duty: Modern Warfare will also feature a Ground war, a mode that will support over 100 players at once. The multiplayer mode will also support 10-versus-10 and 20-versus-20 firefights.

Patrick Kelly, Infinity Ward's creative director and co-studio head, said in a statement that, "Our goal with Modern Warfare is to bring all gamers together from day one to play together."

Gunfight semifinals are live now. Who will win? #ModernWarfare https://t.co/hyBzYeDfqH

(The above story first appeared on LatestLY on Aug 02, 2019 01:06 PM IST. For more news and updates on politics, world, sports, entertainment and lifestyle, log on to our website latestly.com).