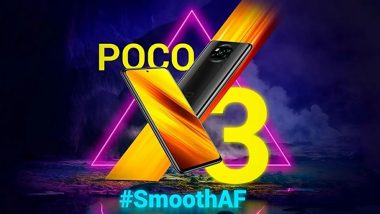 Poco India will be launching the Poco X3 smartphone in the country on September 22, 2020. The handset will be introduced in India next week at noon. The phone maker confirmed this piece of information via its official Twitter account. Reportedly, the upcoming Poco X3 is likely to be a slightly tweaked iteration of the Poco X3 NFC that was launched in the European markets recently. Coming to the tweet, it does not specify any details about the phone. Poco M2 First Online Sale Sees 1.3 Lakh Units Sold via Flipkart.

Additionally, Flipkart has also teased the phone on its e-commerce website. The listing has revealed the presence of the Qualcomm Snapdragon 732G SoC, which is also seen on the Poco X3 NFC. The e-retailer is expected to reveal more details about the phone as we approach towards the launch date.

The teaser video shared by Poco shows the front and rear design of the phone. It also confirms that there will be a hole-punch design for the selfie camera. Like other Poco smartphones, the Poco X3 will also be retailed online via Flipkart. 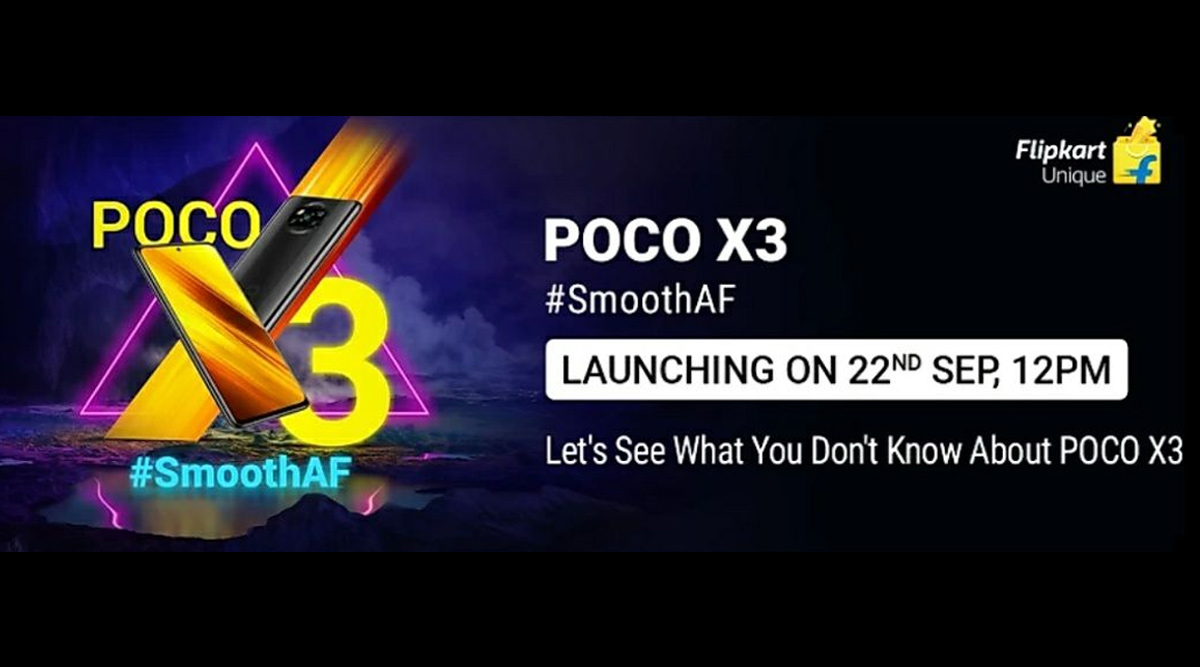 As far as the specifications are concerned, the Poco X3 will sport a 6.67-inch FHD+ display with 120Hz refresh rate. Under the hood, the phone will be powered by the Qualcomm Snapdragon 732G SoC. For photos, there will be a quad rear camera setup comprising of a 64MP Sony IMX682 primary sensor, a 13MP wide-angle sensor, a 2MP depth sensor, and a 2MP macro shooter.

At the front, there will be a 20MP shooter housed in a hole-punch cutout positioned in the center. The handset will also support 33W fast charging. There will also be a side-mounted fingerprint sensor.

It's time to redefine #SmoothAF.

Get ready for the #POCOX3. Arriving on 22nd September at 12 noon on @Flipkart.

To know something that you don't, visit here: https://t.co/NSmwqs6yLY pic.twitter.com/lbeTQfpK9m

The variant-wise prices of the Poco X3 will be announced officially during the launch. However, the European model is offered in two variants - 6GB + 64GB & 6GB + 128GB. While the former is priced at EUR 229, which is around Rs 19,900, the latter costs EUR 269 that is approximately Rs 23,400. It is offered in two colours - Cobalt Blue and Shadow Grey.

(The above story first appeared on LatestLY on Sep 16, 2020 10:00 PM IST. For more news and updates on politics, world, sports, entertainment and lifestyle, log on to our website latestly.com).