China has released the first pictures and videos taken by its probe Tianwen-1 on Mars after it landed on the Red Planet last week. 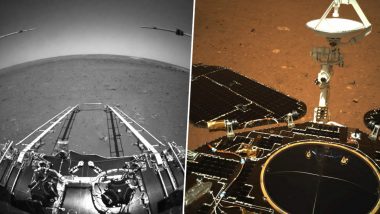 The black-and-white picture shows a ramp on the lander has been extended to the surface of Mars. "The terrain of the rover's forward direction is clearly visible in the image, and the horizon of Mars appears curved due to the wide-angle lens," said the CNSA. The second image, taken by the navigation camera fitted to the rear of the rover, that its solar panel and antenna have unfolded normally. "The red soil and rocks on the Martian surface are clearly visible in the image," the Chinese space agency said.

The probe also sent back a video taken by a camera on the orbiter, showing how the lander and the rover separated from the orbiter during landing. The Tianwen-1 probe touched down at its pre-selected landing area in the southern part of Utopia Planitia, a vast plain on the northern hemisphere of Mars, at 7:18 am (Beijing Time) on May 15. It is the first time China has landed a probe on a planet other than Earth.

The name Tianwen, meaning 'Questions to Heaven', comes from a poem written by the ancient Chinese poet Qu Yuan (about 340-278 BC). China's first Mars rover is named Zhurong after the god of fire in ancient mythology, which echoes with the Chinese name of the red planet: Huoxing - the planet of fire. (With IANS inputs)

(The above story first appeared on LatestLY on May 20, 2021 09:30 AM IST. For more news and updates on politics, world, sports, entertainment and lifestyle, log on to our website latestly.com).