The view captured is brief and grainy, but shows a sudden blast of particles, the CME, escaping the Sun, which is off camera to the upper right. The CME starts about halfway through the video as a bright burst -- the dense leading edge of the CME -- and drifts off screen to the left. 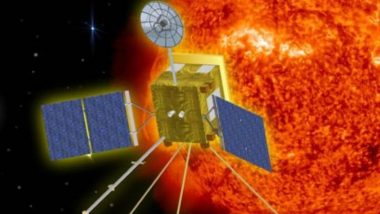 Washington, May 18: NASA and European Space Agency's Sun-watching spacecraft has captured the first solar eruption. On February 12, the Solar Orbiter caught sight of coronal mass ejection, or CME, NASA said in a statement. The CME was captured by NASA instrument, the Solar Orbiter Heliospheric Imager (SoloHI) onboard the spacecraft.

SoloHI watches the solar wind, dust, and cosmic rays that fill the space between the Sun and the planets. It used one of its four detectors at less than 15 per cent of its normal cadence to reduce the amount of data acquired.A

The view captured is brief and grainy, but shows a sudden blast of particles, the CME, escaping the Sun, which is off camera to the upper right. The CME starts about halfway through the video as a bright burst -- the dense leading edge of the CME -- and drifts off screen to the left. Lunar Eclipse 2021 This Month: Date, Timings and Place, Everything You Need To Know About The Celestial Event.

Our instrument aboard the @ESA & NASA #SolarOrbiter mission has just captured its first solar eruption! ☀️ Learn more about the sun-watching spacecraft and its observations: https://t.co/e5r6SlxNhY pic.twitter.com/JnCa38R3aV

At the time the eruption reached the spacecraft, Solar Orbiter had just passed behind the Sun from Earth's perspective and was coming back around the other side. When the mission was being planned, the team wasn't expecting to be able to record any data during that time.

Two more imagers on Solar Orbiter -- ESA's Extreme Ultraviolet Imager and Metis -- also captured views of the CME. NASA's STEREO-A spacecraft, short for Solar Terrestrial Relations Observatory, also caught a glimpse from its COR2 detector, which blocks out the Sun's bright disk to see otherwise faint phenomena in the solar wind. NASA spacecraft have been watching CMEs for decades, but Solar Orbiter is still a game-changer.

"We've realised in the last 25 years that there's a lot that happens to a CME between the surface of the Sun and Earth," said Robin Colaninno, principal investigator for SoloHI at the US Naval Research Laboratory in Washington DC. Fake Apple AirPods Worth $7.16 Million Seized in the US: Report.

"So we're hoping to get much better resolution images of all of these outflows by being closer to the Sun," Colaninno added. Solar Orbiter was launched in February 2020.

The spacecraft has already taken the closest picture of the Sun to date. Its official mission begins in November, when SoloHI and the rest of the remote-sensing instruments will be switched on in full science mode.

(The above story first appeared on LatestLY on May 19, 2021 01:12 PM IST. For more news and updates on politics, world, sports, entertainment and lifestyle, log on to our website latestly.com).