The team explains Sun emits a continuous stream of charged particles called the Solar Wind. The two selected events were ideal for studying the effects of the CME shocks moving through the solar wind. 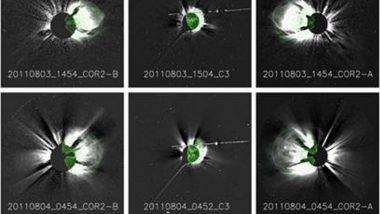 A recent study has shown how conditions and events in the solar atmosphere like coronal mass ejections influence the accuracy of space weather prediction, which is crucial for the health of our satellites. This understanding will aid the interpretation of data from the upcoming Aditya-L1, India's first solar mission.

Space weather refers to the conditions in the solar wind and near-Earth space, which can adversely affect the performance of space-borne and ground-based technological systems. The space weather near the Earth is mainly due to Coronal Mass Ejections (CMEs), which are frequent explosive expulsions of huge magnetized plasma from the Sun into its surroundings, which can blow past the Earth. Example of space weather events is the geomagnetic storm, a perturbation in the Earth’s magnetic field, which can last for few hours to few days. Understanding of how events in the solar atmosphere influence space weather is necessary for monitoring and maintaining our satellites.

In the present work, astronomers led by Dr. Wageesh Mishra of the Indian Institute of Astrophysics (IIA), Bengaluru, an autonomous institute of the Department of Science & Technology, Govt. Of India showed that plasma properties and Earth arrival times of CMEs from the Sun can vary substantially with longitudinal locations in the interplanetary space. This research is published in the Monthly Notices of the Royal Astronomy journal and is co-authored by Kunjal Dave from C.U. Shah University, Gujarat, Prof. Nandita Srivastava from Physical Research Laboratory, Udaipur, and Prof. Luca Teriaca from the Max Planck Institute of for the Solar System Research, Germany.

In this research, the team studied the Earth-directed CMEs and interplanetary counterparts of CMEs (ICMEs). With access to publicly available plasma measurements in situ at three locations in the Solar System, -- two of NASA’s STEREO spacecraft and the LASCO coronagraph onboard SOHO located near the first Lagrangian point (L1) on the Sun-Earth line, they reconstructed a 3D view of the CMEs & ICMEs. The two events that are the basis of the present study are the ICMEs of 11th March and 6th August 2011 (which is when they arrived at Earth). Using multi-point remote and in situ observations, the study investigated the differences in the dynamics, arrival time, plasma, and magnetic field parameters of ICME structures at the locations in the heliosphere where the different satellites are located.

The team explains Sun emits a continuous stream of charged particles called the Solar Wind. The two selected events were ideal for studying the effects of the CME shocks moving through the solar wind. Aditya-L1: After Chandrayaan 2 Launch, ISRO Eyes India's First-Ever Solar Mission in 2020.

“We found that plasma characteristics and arrival times of a CME-driven shock, propagating in a pre-conditioned inhomogeneous medium, may be different at different longitudinal locations in the heliosphere,” said Wageesh Mishra, the lead author.

The study highlights the difficulties in connecting the local observations of an ICME from a single in situ spacecraft to its global structures and explains that accurate prediction of large CME structures at any location in the heliosphere is challenging. It emphasized that lack of information about the pre-conditioned ambient solar wind medium can severely limit the accuracy of CME arrival time and space weather prediction. This new understanding will aid the interpretation of data from space missions.

(The above story first appeared on LatestLY on Sep 21, 2021 06:18 PM IST. For more news and updates on politics, world, sports, entertainment and lifestyle, log on to our website latestly.com).