Saturn, Jupiter and Moon Align in Night Sky Once Again and People Haven't Missed Out on The Opportunity to Capture the Conjunction (Check Pics) 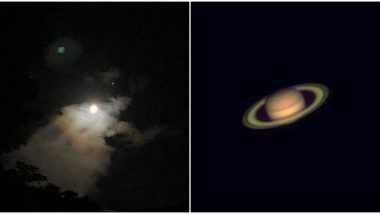 The night sky is proving to be a wonderful spectacle these days for some. While it may be cloudy in some regions because of the rains, those with a keen eye for stars and planets managed to capture the conjunction of Saturn, Jupiter and Moon once again on Saturday night. Those who managed to capture all the three celestial objects have taken to social media to share pictures of the same. Interestingly, the three objects spotted close to each other has not been so rare in the recent past. Right after the penumbral lunar eclipse last month, the occurrence was seen in the night sky.

Saturn and Jupiter have been visible in June too. Now at the early start of August, the two planets, far away in our solar system were spotted with our satellite. While they appear to be closer to one another, all three objects are too far from each other. Saturn will be appearing among the brightest objects in the sky all the month of August. This is because it is in opposition to the sun. A planet coming in opposition means that it is directly opposite of the Sun, perfectly aligning with the Earth. Saturn reached opposition on July 20 and will be visible for sky gazers throughout the month of August, appearing at its brightest until August 9. Jupiter, Saturn and Moon Form a Triangle in Rare Celestial Event in Night Sky, Check Pics of The Conjunction.

Check Pics of the Saturn, Moon and Jupiter Sighting Together:

Moon and Jupiter in Conjunction

Moon and Jupiter are in conjunction tonight 🔭 you can see both celestial bodies in one frame as well as Jupiter's moon.

Got the camera and very long lens out 📷🪐🌌 Jupiter and Saturn are both looking nice and clear! pic.twitter.com/yFRvaEwKrz

That Flare of Moonlight

A Close up of The Moon

Saturday's moon with Jupiter and Saturn, and a little bit of cloud. pic.twitter.com/DoBkhxZ4zy

The moon, Jupiter and Saturn in alignment on this balmy night. pic.twitter.com/iHahjr4DEg

Finally, it stopped raining. Seeing was only average, but it gave me a chance to image Jupiter and Saturn before the Moon gets in the way... pic.twitter.com/09SPT2jozl

If you too want to see this spectacle and then you can check out the night sky for the next two days as both the planets will appear bright. If you have an access to a telescope then you may even get to see one or two of Saturn's moon. Saturn and Jupiter will be seen bright together until December 2020.

(The above story first appeared on LatestLY on Aug 02, 2020 05:04 PM IST. For more news and updates on politics, world, sports, entertainment and lifestyle, log on to our website latestly.com).