When people looked up at the sky, along with the full Moon, they saw two prominent members of our solar system—Jupiter and Saturn preceded by Lunar Eclipse 2020. Netizens were quick to take pictures and videos of this rare celestial occurrence to give everyone the spectacular view. 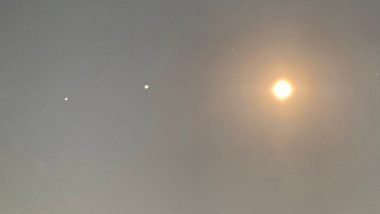 The Penumbral lunar eclipse ended at 11:22 IST today. The total duration of this eclipse was around 2 hours and 45 minutes. Many were able to see the eclipse, but they were able to see much more. The beauty of the Full Moon on July 4 and July 5 was enhanced by two shinning planets, Jupiter and Saturn. It is a rare conjunction that does not happen every night. When people looked up at the sky, along with the full Moon, they saw two prominent members of our solar system—Jupiter and Saturn preceded by Lunar Eclipse 2020. Netizens were quick to take pictures and videos of this rare celestial occurrence to give everyone the spectacular view. Penumbral Lunar Eclipse 2020 Photos and Videos: Sky Lovers Share Pictures of July 5 Full Moon Shining Bright in Night Sky.

Forming a perfect planetary alignment with the Moon, the two gas giant planets Jupiter and Saturn, which were not only quite close to each other but were at their brightest and visible all night long. Many captured beautiful views of the eclipse and the rare occurrence of the planetary alignment in the night sky. Adjusting their phone camera for the perfect capture, netizens surely gave the best views to those who could not witness this rare celestial occurrence. In this article, we bring you the best pictures and videos that capture the beautiful alignment of Jupiter, Saturn and the Moon. 2020 Eclipses Calendar With Dates and Time: From Lunar Eclipse to Solar Eclipse, List of Celestial Events to Occur This Year.

Here Are the Pics and Videos:

More pics of Jupiter and Saturn tonight. Taken with my phone and telescope. pic.twitter.com/ez2MRgymSC

Jupiter and Saturn are so bright tonight I can get a picture of them with my freakin phone! And they're lined up perfectly with the Moon.

(Moon not to scale) pic.twitter.com/uh1jaTM3qg

Another Picture of the Rare Celestial Event

Manage to catch Jupiter and Saturn next to Luna tonight, even despite the added air pollution. pic.twitter.com/Ke25kkJn1v

Beautiful sunday with the beautiful moon, jupiter and saturn💖 pic.twitter.com/RZX5pobf2n

⚡️Tonight a rare astronomical phenomenon began - the parade of planets. Already from midnight you can take Jupiter, Saturn, Mars and Venus without special equipment. @vesti_news pic.twitter.com/cYz8hE59lm

Pic of the Spectacular Alignment

The last full moon on the 4th for 11 years. You also can also see the Jupiter and Saturn all lined up rn pic.twitter.com/GRq72oRqSO

July 5 Lunar Eclipse is known as Buck Moon Eclipse. But the full Moon was not alone and was accompanied with the two bright planets of the solar system. The next lunar eclipse is lined up from November 29 to November 30. Again, as per reports, the next time the Moon will be in close conjunction with the two planetary companions, Jupiter and Saturn will be on October 22, 2020.

(The above story first appeared on LatestLY on Jul 05, 2020 06:52 PM IST. For more news and updates on politics, world, sports, entertainment and lifestyle, log on to our website latestly.com).