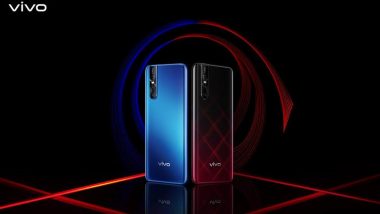 Vivo India is all set to launch the all-new Vivo V15 Pro smartphone today in the Indian market. To be packed with many premium features, the new device from the Chinese smartphone maker will be the first to feature 32MP Pop-up selfie camera. Moreover, the company has been teasing the new Vivo V15 Pro on its social media platforms. We have already seen multiple images and videos rolled out by the company ahead of the launch. Once launched, the Vivo smartphone will be retailed exclusively via Amazon.in. Flipkart's Mobile Bonanza Sale: Best Deals on Realme 2 Pro, Xiaomi Poco F1, Redmi Note 6 Pro, Vivo V11

As far as the prices are concerned, the Chinese phone maker has remained tight-lipped. Some reports claim that the phone could be priced around Rs 30,000.

The company is scheduled to launch the new Vivo V15 Pro in India at 12 PM IST onwards. The launch event will be live streamed on the official YouTube Channel. Moreover, the company will also be bringing updates from the event on other official social media platforms – Facebook & Twitter.

As the rear, the smartphone will get a 48MP primary camera with 12MP quad pixel lens that functions via pixel binning whereas the secondary rear camera will be an 8MP wide-angle shooter. The third camera will be a 5MP snapper.

Under the hood, the device will be powered by Snapdragon 675 chipset which will be clubbed with 6GB of RAM and 128GB on internal storage. The new Vivo V15 Pro will sport an FHD+ Super AMOLED display screen with 19.5:9 aspect ratio. The phone will be backed by a 3700 mAh battery with company’s dual engine fast charging technology.

(The above story first appeared on LatestLY on Feb 20, 2019 11:38 AM IST. For more news and updates on politics, world, sports, entertainment and lifestyle, log on to our website latestly.com).