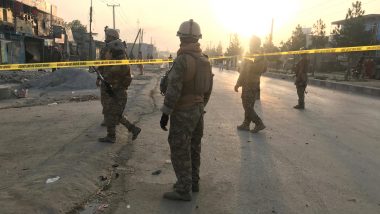 Kabul, October 21:  At least 25 Afghan security personnel were killed in an ambush on Wednesday. According to reports, the security personnel were killed in the Taliban ambush in Takhar province in the Northeast part of the country. Among the deceased was deputy police chief of the district. Afghanistan: 8 Soldiers Killed in Suicide Car Bombing in Maidan Wardak, Taliban Claims Responsibility.

Many security personnel were also reportedly injured in the attack. The injured were shifted to nearby hospitals. Currently, the gunfight is still underway. Taliban also reportedly suffered casualties. However, the Taliban have not commented on the incident. Afghanistan: 5 Soldiers, 4 Civilians Killed in Helmand Bomb Attack.

“Fighting is still continuing and the Taliban have also suffered heavy casualties,” reported global news agency AFP quoting a spokesman for the governor of Takhar province as saying. The incident took place when the security personnel were on their way for an operation in the district. More details are still awaited.

(The above story first appeared on LatestLY on Oct 21, 2020 02:32 PM IST. For more news and updates on politics, world, sports, entertainment and lifestyle, log on to our website latestly.com).