Russian opposition leader Alexei Navalny was detained upon his arrival in Moscow from Germany, where he received medical treatment after he was allegedly poisoned last year. In a statement on Sundat, Russia's Federal Penitentiary Service said its officers detained Navalny at the Sheremetyevo International Airport. 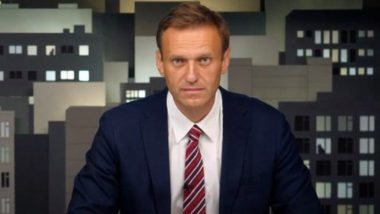 Moscow, January 18: Russian opposition leader Alexei Navalny was detained upon his arrival in Moscow from Germany, where he received medical treatment after he was allegedly poisoned last year. In a statement on Sundat, Russia's Federal Penitentiary Service said its officers detained Navalny at the Sheremetyevo International Airport for his "systematic violations of the conditions of the probationary period", Xinhua news agency reported.

The opposition figure on probation was put on a wanted list on December 29, 2020 and he will remain in detention until a court ruling, the service said. Meanwhile, top European Union (EU) officials expressed concerns over Navalny's detention, TASS News Agency reported. "The detainment of Alexey Navalny upon arrival in Moscow is unacceptable. I call on Russian authorities to immediately release him," European Council President Charles Michel stated on Twitter. Kremlin Critic Alexei Navalny Departs From Germany to Russia Despite Arrest Threat.

"We ask the Russian authorities for his immediate release. We are ready to invite him to the European Parliament," European Parliament President David Sassoli said in a tweet. "Russian authorities must respect Alexei Navalny's rights and release him immediately. Politicization of the judiciary is unacceptable," the European Union's High Representative for Foreign Affairs and Security Policy Josep Borrell echoed.

The issue will be discussed at an EU Foreign Affairs Council meeting on January 25 and at the European Parliament's session that begins on Monday, a diplomatic source in Brussels told TASS. US Secretary of State Mike Pompeo has also called for the opposition figure's immediate release. In a statement, Pompeo said the "detention is the latest in a series of attempts to silence Navalny and other opposition figures and independent voices who are critical of Russian authorities". Alexei Navalny, Russian Opposition Leader, 'Probably Poisoned', Say German Doctors.

"We urge the Russian government to provide a level playing field for all political parties and candidates seeking to compete in the electoral process. Alexei Navalny is not the problem. We demand his immediate and unconditional release," Pompeo added. Navalny, a harsh Kremlin critic, fell into a coma on a flight from the Russian city of Tomsk to Moscow on August 20, 2020. He was then transferred to a Berlin hospital with suspected poisoning symptoms.

(The above story first appeared on LatestLY on Jan 18, 2021 03:36 PM IST. For more news and updates on politics, world, sports, entertainment and lifestyle, log on to our website latestly.com).