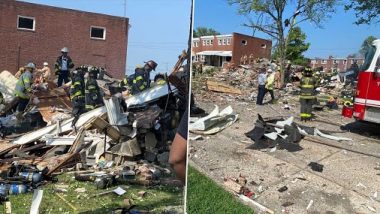 Baltimore, August 10: A major explosion tore through a Baltimore neighbourhood on Monday, levelling several houses, a Reuters report said. Baltimore is a major city in Maryland in the United States of America (USA). According to reports, while one person has been killed, at least five people were trapped inside houses. As many as three have been critically injuring, firefighters informed. The Baltimore firefighters union are searching for trapped ones. The explosion was reported before 10 am at Reisterstown and Labyrinth roads, just behind Reisterstown Plaza shopping center.

The three patients, who were in critical condition, were rescued by firefighters, the Baltimore Firefighters IAFF Local 734 posted on Twitter. "Several houses exploded. At least 5 people trapped, some children. A Collapse Response and Second Alarm has been called," the Baltimore Firefighters IAFF Local 734 said on Twitter. An alert has been sounded by Baltimore Police and people have been warned to avoid the area, as the gas leak is reportedly active. Beirut Blast Death Toll Reaches 200, About 7,000 Injured.

Several houses exploded. At least 5 people trapped, some children. A Collapse Respose and Second Alarm has been called.

There has been a gas explosion on the 4200 block of Labyrinth Rd behind the shopping center. Baltimore City as well as Baltimore County Fire and Police departments are on scene. Please keep away from the area and join me in praying for all those involved. pic.twitter.com/qKnJ7wl84n

According to several tweets, the blast is believed to have been a gas explosion that destroyed three houses in the 4200 block of Labrynth Road in NW Baltimore. As per images shown on WBFF television, a section of row houses leveled with rubble strewn about. Moreover, according to a report by baltimoresun.com, Baltimore Gas and Electric Co. spokesperson Richard Yost said the company received a call from the fire department around 9:54 a.m. asking crews to respond to the scene.

(The above story first appeared on LatestLY on Aug 10, 2020 09:22 PM IST. For more news and updates on politics, world, sports, entertainment and lifestyle, log on to our website latestly.com).