Donald Trump Expresses Confidence on PM Narendra Modi When Asked Over Imran Khan's Statement on Al-Qaeda and Terrorism, Says 'PM Modi Will Take Care of it' 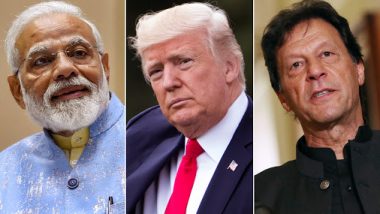 New York, September 24: Hours after reiterating his intentions to mediate in the bilateral relations of India and Pakistan on the Jammu and Kashmir issue, United States President on Tuesday expressed his confidence on Prime Minister Narendra Modi. During the joint press conference in New York, Trump mentioned that PM Modi could look after the issues of Al-Qaeda and terrorism in the South Asian region.

Answering to a question asked by a journalist over Pakistan PM Imran Khan's statement admitting that the Pakistani ISI trained terrorist organisation Al-Qaeda, the US President said, "...The Prime Minister (PM Modi) will take care of it." Pakistan Committed One of the Biggest Blunders by Joining US After 9/11, Says Imran Khan.

Here what Trump said to the press:

#WATCH New York: US President Donald Trump says, "...The Prime Minister (PM Modi) will take care of it" when asked 'how do you see the statement coming from Pakistani PM admitting that the Pakistani ISI trained Al Qaeda?' pic.twitter.com/xex80Hg5aH

Apart from this, Trump expressed hope that relations between India and Pakistan would improve when both the leaders -- PM Modi and Khan -- get to know each other. He said, "I really believe that Prime Minister Modi and Prime Minister Khan will get along when they get to know each other, I think a lot of good things will come from that meeting." Donald Trump Offers to Mediate Between India and Pakistan on Kashmir Issue Yet Again, US President Reiterates His Stand Day After Calling PM Narendra Modi's Speech 'Very Aggressive'; Watch Video.

#WATCH New York: US President Donald Trump says, "I really believe that Prime Minister Modi and Prime Minister Khan will get along when they get to know each other, I think a lot of good things will come from that meeting." pic.twitter.com/lTTRU73UdC

Earlier on Monday, Imran Khan while addressing the press on the sidelines of Council on Foreign Relations (CFR) think-tank admitted that Pakistan committed "one of the biggest blunders" by joining the US after the 9/11 attacks, saying the previous governments "should not have pledged what they could not deliver."

Khan had said that Pakistan extended support to American forces against the Taliban. Adding more, he said, "In the 1980s, when the Soviets invaded Afghanistan, Pakistan, helped by the US, organised the resistance to the Soviets. The ISI (Inter-Services Intelligence) trained militants who were invited from all over the Muslim world to do jihad against the Soviets." Donald Trump Calls PM Narendra Modi 'The Father of India', Compares Him to Elvis Presley, Says 'Will Have Trade Deal Very Soon'.

The Pakistan PM slammed the previous tenures in his country and stated that they should have remained neutral in the conflict between the USA and the Soviet Union. Insisting on peace talks, Khan had mentioned that there could be no military solution in Afghanistan.

(The above story first appeared on LatestLY on Sep 24, 2019 11:30 PM IST. For more news and updates on politics, world, sports, entertainment and lifestyle, log on to our website latestly.com).