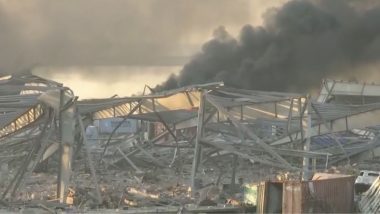 Beirut, August 10: Lebanon Prime Minister Hassan Diab is expected to step down later tonight, whereas, the entire Cabinet has submitted its resignation amid the protests over the fatal explosion in Beirut. Four senior ministers had already rendered their resignations, as demonstrations rocked the Lebanese capital over the past 48 hours seeking government accountability for the blas that has claimed over 200 lives.

Health Minister Hammad Hassan, while speaking to reporters, confirmed that the entire government has resigned. He also added that PM Diab was on his way to the Presidential Palace to submit the resignations.

Their resignations were preceded by a violent demonstration in Beirut, with hundreds of protesters turning up at the Parliament street and pelting stones at security personnel.

The blast, on August 4, was considered as the most brutal in the recent history of Lebanon. The explosion was triggered after 2,750 tonnes of ammonium nitrate stored in a warehouse at Beirut port caught fire. While the official death toll is 201, over 7,000 others were left injured. The fatality count is feared to rise further.

The protesters are also demanding the resignation of President Michel Aoun, who is being backed by the Shiite militia group Hezbollah. The President was already under fire over his handling of the economic crisis, with Lebanon recording the worst unemployment rate in the last two decades.

(The above story first appeared on LatestLY on Aug 10, 2020 08:49 PM IST. For more news and updates on politics, world, sports, entertainment and lifestyle, log on to our website latestly.com).