PM Narendra Modi Extended Support to Kyrgyzstan During SCO Summit, Says 'Terrorism Will Not be Tolerated at Any Cost' 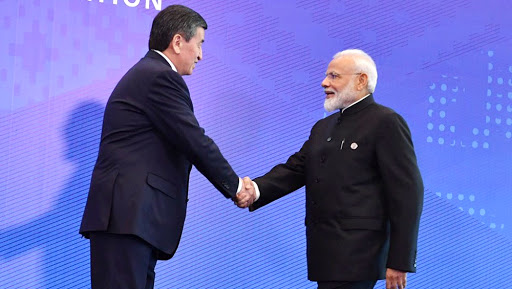 Bishkek, June 14: Prime Minister Narendra Modi on Friday extended his support to Kyrgyzstan by stating that India will stand with it in the fight against terrorism. He mentioned it very clearly that terrorism will not be tolerated at any cost.

Addressing a joint statement with President of Kyrgyzstan Sooronbay Jeenbekov in Bishkek, on the sidelines of Shanghai Cooperation Organisation (SCO) summit, PM Modi said, "We are together in the fight against terrorism, it is imperative to give out a message to the world that terrorism will not be tolerated at any cost." PM Narendra Modi Talks Tough on Terror at SCO Summit 2019, Says ‘Countries Supporting Terrorism Must Be Held Accountable’

He also mentioned that India and Kyrgyzstan have agreed to celebrate 2021 as the cultural and friendship building year. Along with this, the Indian Premier stated that the significant outcomes from the talks between him and President Jeenbekov will benefit India-Kyrgyzstan relations.

Earlier, while speaking at the summit, PM Modi said, "Countries supporting, aiding and funding terrorism must be held accountable." He had added, "To tackle the danger of terrorism, all humanitarian powers should come forward together. India is committed to physical connectivity with SCO nations."