Nepal PM KP Sharma Oli, Under Mounting Pressure to Step Down, Tells His Ruling Party to 'Be Prepared For Anything' 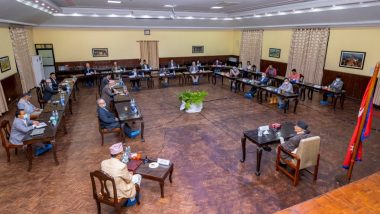 Kathmandu, July 4: Nepal Prime Minister KP Sharma Oli, under mounting pressure to step down, hinted at "taking forceful decision" in the near future in bid to prevent his fall from power. After meeting President Bidhya Devi Bhandari, Oli convened an urgent meet of his ruling Nepali Communist Party, asking the top brass to be prepared for all eventualities.

"Party’s unity at stake, anything can happen, be prepared. Plots being hatched against me and President, this might result in me taking forceful decisions. So, you all now need to clear your stance and be prepared," Oli was reported as saying. Nepal's FM Radio Stations Beam Anti-India Propaganda Across Border, Say Residents.

Oli is at loggerheads with Pushpa Kamal Dahal 'Prachanda', the co-chairman of the Nepali Communist Party. Earlier this week, the Prime Minister had accused Prachanda of hatching a "conspiracy in New Delhi" to topple his government.

Party’s unity at stake, anything can happen, be prepared. Plots being hatched against me&President, this might result in me taking forceful decisions. So, you all now need to clear your stance&be prepared: KP Oli, Nepal PM at meeting with ministers(Source in the meeting told ANI) https://t.co/IC3fp240mw

The Nepal PM's remarks dragged India into the domestic political crisis. Oli's tenure has seen the relations with the western neighbour hitting an all-time low, with his government passing a constitutional amendment Bill to include three border regions which are currently based in India's Uttarakhand state.

The faction led by Prachanda, along with the Opposition Nepali Congress, accused Oli of using nationalistic causes to hide the alleged failures of his government on various fronts. His alleged autocratic style of functioning has also been decried, with intra-party rebels calling for his resignation.

(The above story first appeared on LatestLY on Jul 04, 2020 10:02 PM IST. For more news and updates on politics, world, sports, entertainment and lifestyle, log on to our website latestly.com).