North Korean websites on Thursday slammed the annual combined military training between South Korea and the US, labelling it as preparation for war. 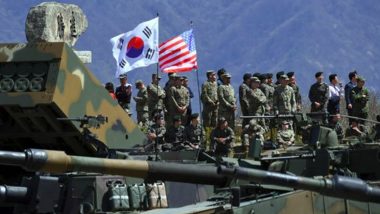 Seoul, April 21: North Korean websites on Thursday slammed the annual combined military training between South Korea and the US, labelling it as preparation for war.

Earlier this week, South Korea and the US kicked off their combined springtime military training that does not include any field troop maneuvers, reports Yonhap News Agency. The drills will continue until April 28.

"This is a reckless, dangerous play with fires of war and a clear exercise for the invasion of the North, driving the Korean Peninsula's political situation that is already unstable to an extreme," Uriminzokkiri, a North Korean propaganda outlet, said in a commentary posted on its website.

It added that inter-Korean relations and the political situation on the peninsula have been thrown into "the worst state".

It took issue with the training as well as remarks by South Korean President-elect Yoon Suk-yeol and Defence Minister Suh Wook on the potential option of a "pre-emptive strike" against the North if inevitable for national security. China Conducting Military Drills Near Vietnam Coast.

Another propaganda website Meari also lambasted the drills, arguing that its true objective is perfecting plans for an invasion of the North.

(The above story first appeared on LatestLY on Apr 21, 2022 11:53 AM IST. For more news and updates on politics, world, sports, entertainment and lifestyle, log on to our website latestly.com).