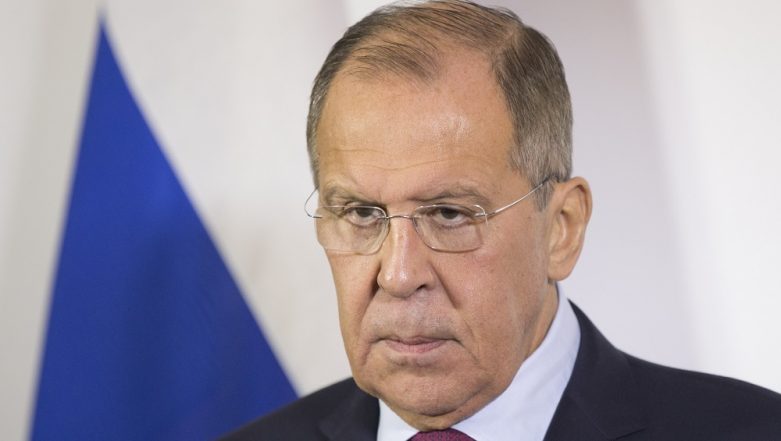 Moscow, February 6: Russia on Wednesday said that it will mirror the US' withdrawal from the Intermediate-Range Nuclear Forces (INF) Treaty between the countries, formally exiting the agreement in six months. The INF Treaty was signed in December 1987 between the then Soviet Union and the US on the elimination of intermediate-range and shorter-range missiles.

Moscow and Washington have been accusing each other of violating the agreement in recent years amid increasing tensions. The latest move by Russia was announced by Foreign Minister Sergey Lavrov, according to state news agency RIA-Novosti. It came after the Donald Trump administration last week said it would be pulling out of the nuclear missile treaty, accusing Moscow of violating its terms since 2014. Russia Will Develop Nuclear Missiles if US Walks Out of Cold War Era Treaty, Warns Vladimir Putin.

Lavrov called Washington's accusations "unfounded" and said that Russian President Vladimir Putin's position was to "respond in a mirrored fashion" to the US. "The Americans suspended their participation in this treaty -- we did the same. After a six-month period, according to the results of the official note of the US on withdrawal from this treaty, it will cease to function," he added.

The US' withdrawal has raised concerns about a renewed arms race with Moscow and put European allies on edge, CNN reported. "We are heading into a direction we have not been in in 40 years. No arms control limits or rules that we are both following, and that is very dangerous," said Lynn Rusten, a senior Director for Arms Control and Non-proliferation at the National Security Council during the Obama administration.

Also on Wednesday, the Russian military announced carrying out a successful test of a Yars intercontinental ballistic missile -- a system designed to carry thermonuclear warheads.

In a statement on its Facebook page on Wednesday, the Russian Military of Defence said the missile was fired from the Plesetsk Cosmodrome, in northern Russia, towards the country's far east. The long-range missile was launched to test its "tactical, technical and flight characteristics", the military said.