Sri Lankan scientists have warned that 99,000 metric tonnes of organic fertiliser stock to the tune of $63 million from China would be agriculture disaster as they contained harmful micro-organism. 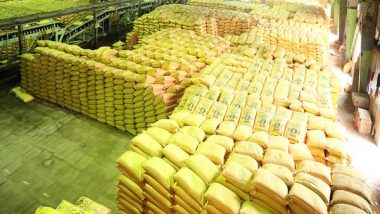 Colombo, September 22: Sri Lankan scientists have warned that 99,000 metric tonnes of organic fertiliser stock to the tune of $63 million from China would be agriculture disaster as they contained harmful micro-organism. Preliminary tests conducted on the samples of organic fertilizer ready to be imported to Sri Lanka have been found to be infected with Erwinia, a notorious plant pathogen that causes severe post harvest losses in crops.

"Erwinia is identified as a severe plant pathogen that can have major effect on agriculture. It also affects root crops that are economically important and are grown in large amounts. Effect of this pathogen could be found even during the post harvest," said Devika de Costa Professor of Plant protection attached to the University Peradeniya. Sri Lanka: High-Priced Chinese COVID-19 Vaccine ‘Sinopharm’ Sparks Row.

Sri Lanka suddenly stopped importing chemical fertilizer and urged farmers to convert to organic fertilizer. However, the ban was also a result of forex shortages and lack of dollar reserves for imports. President Gotabaya Rajapaksa recently appointed a Presidential Task Force to prepare a roadmap for the complete transition from Chemical farming to organic farming.

However, government was forced to provide fertilizer for the farmers as the rice planting Maha season starts in September. Agriculture Ministry had selected China's Qingdao Seawin Biottech Group Co, Ltd to be the supplier of organic fertilizer and two samples were brought to the country and tested by the Sri Lanka Standard Institutions and National Plant Quarantine Service (NPQS) and Sri Lanka Atomic Energy Board. They were found to have contained harmful micro organisms, pathogens and diseases harmful to the soil, plants and humans.

Activists on farmers' rights too have complained that harmful species of bacteria were contained in the fertilizer samples that were to be imported. "None of the laws have been followed when importing these samples. Did the fertiliser have safety certificate, questioned, Anuradha Tennakone, Chairman of the National Agrarian Unity. He also said that pressure has been exerted on the Sri Lankan Standard Institute to change their finding.

The organisation warned that the alleged organic fertiliser imported from China would cause much more damage than the chemical fertilizer. Prof Chandima Wijegunawardana, Sri Lankan lecturer attached to Princess Nourah Bint Abdulrahman University in Riyadh said that China is the latest country that joined the team which wants to change the genetics of the country. "Ideologically if this so called organic fertiliser dumps here Sri Lankans could be genetically changed," she warned.

The party leader Anura Kumara Dissanayake complained that awarding to the China was questionable and there had been undue attempts to somehow award this tender to the Chinese company.

"We warned that it was China's waste that is going to be brought to Sri Lanka. It was a massive disaster that was to be done. A great loss has been caused to the farmers," he said.

Early this year the political party alleged that the government was banning chemical fertiliser to import so-called organic fertilizer from China which could be harmful to Sri Lanka's agriculture.

(The above story first appeared on LatestLY on Sep 22, 2021 12:08 PM IST. For more news and updates on politics, world, sports, entertainment and lifestyle, log on to our website latestly.com).