TikTok to be Banned in US? Donald Trump Says 'It's Something We're Looking At' to Punish China

US President Donald Trump has said that his administration is mulling a ban on popular video-sharing app TikTok in the United States. 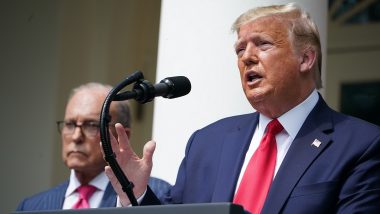 Washington, July 8: US President Donald Trump has said that his administration is mulling a ban on popular video-sharing app TikTok in the United States. Speaking to a news channel, Donald Trump said the ban on TikTok was "one of many" options he was considering to retaliate against China over its handling of the coronavirus (COVID-19) outbreak, which has affected nearly 3 million people in the US and claimed more than 130,000 lives. TikTok App Banned by Indian Government, Chinese Company ByteDance Stand to Lose More Than Rs 3 Crore Everyday in Revenues.

"It's something we're looking at," Trump told Gray Television on Tuesday when asked about a possible ban on TikTok. "It's a big business. Look, what happened with China with this virus, what they've done to this country and to the entire world is disgraceful," the US President remarked. Trump's comments came days after US Secretary of State Mike Pompeo indicated a ban on TikTok.

Pompeo said that the US was "certainly looking at" banning Chinese social media apps, including Tik Tok. "I don't want to get out in front of the President (Donald Trump), but it's something we're looking at," Pompeo had said in an interview with Fox News. This came after India banned 59 Chinese apps, including TikTok, to counter the threat posed by these applications to the country's "sovereignty and security".

Reacting to Trump and Pompeo's remarks, Chinese foreign ministry spokesman Zhao Lijian said: "The remarks made by some politicians in the US are totally groundless and a malicious smear. The Chinese government has always asked Chinese businesses to conduct cooperation overseas on the basis of law and compliance." ByteDance, which owns TikTok, also denied that it shares users' data with China.

"TikTok is led by an American CEO, with hundreds of employees and key leaders across safety, security, product, and public policy here in the US," a TikTok spokesperson told Bloomberg. "We have never provided user data to the Chinese government, nor would we do so if asked."

(The above story first appeared on LatestLY on Jul 08, 2020 05:08 PM IST. For more news and updates on politics, world, sports, entertainment and lifestyle, log on to our website latestly.com).

Comments
Tags:
China Donald Trump TikTok TikTok ban TikTok Ban in US US
Comments
You might also like