Huawei predicts there would be the 2.8 billion 5G users by 2025, and looks seriously at India to offset losses it is going to incur in the wake of US ban. 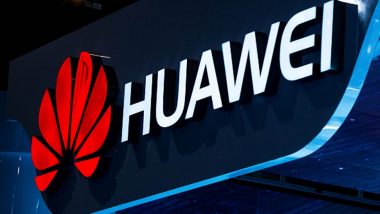 New Delhi, June 2: Sandwiched between the ongoing US-China trade war, Chinese telecom equipment major Huawei is frantically looking to salvage its prestige and fast cover the lost ground. The company is bullish on shifting gears towards its India operations to revive its reputation as a reliable smartphone manufacturer and a 5G player. Trump Urges UK to Be 'very Careful' over Huawei and 5G.

With the digital-friendly Narendra Modi government back at the helm, it would be interesting to see what would be the reaction towards Huawei - without offending US President Donald Trump who is going after Huawei and its 5G dream.

India, with a stable technology scenario, is where Huawei has decided to place its maximum energies on - for both the devices and 5G technology segments where the US ban is set to make it bleed profusely in the coming quarters.

Huawei predicts there would be the 2.8 billion 5G users by 2025, and looks seriously at India to offset losses it is going to incur in the wake of US ban.

"Unlike 4G, 5G is a completely new terrain and India would need to test various use cases for 5G adoption in India. As such, it would need to depend on the capabilities of a variety of vendors, including Huawei," Ram said. Although India is targeting 2020 for 5G roll out, the country is yet to allocate 5G spectrum to operators even for 5G trial of use cases.

"Huawei has been working with the Indian telecom players in the market to start 5G field trials. As such, I anticipate Huawei to be allowed to participate in the trials," added Ram.

When it comes to 5G smartphones, an absence of a 5G-ready ecosystem in the country would hamper any manufacturer. The situation at hand has dashed hopes of Indian consumers willing to acquire the just-released foldable phone Mate X from Huawei any time soon.

The company says it is not planning to bring a 4G version of the Mate X shortly and that its availability will depend on the 5G network in the country. Huawei pipped Apple as the second largest smartphone seller in the first quarter of 2019 after Samsung. It clocked 17 per cent market share in the global smartphone market, according to Counterpoint Research.

"I think the situation, if escalated further, will make it challenging for Huawei irrespective of the country it operates in. China can only be an exception in the short term. After Huawei Ban, China Threatens to Kick out 'unreliable Foreign Companies'.

"The problems with supply chain and sourcing, especially at the operating system (OS) level, can have potential impact on Huawei in its global operations including in India," Tarun Pathak, Associate Director at Counterpoint Research, told IANS. When it comes to smartphones, consumer sentiment in India towards Huawei will potentially continue to be ambivalent in the face of Android ban.

"Huawei's India smartphone business will see marginal to no impact in the short-term. From a long-term perspective, the Android ban may potentially have significant ramifications for Huawei devices," suggested Ram.

(The above story first appeared on LatestLY on Jun 02, 2019 08:48 AM IST. For more news and updates on politics, world, sports, entertainment and lifestyle, log on to our website latestly.com).