Hemsworth and the rest of the crew have started filming on the fourth installment of the franchise, Thor: Love and Thunder, following a postponement caused by the coronavirus pandemic. 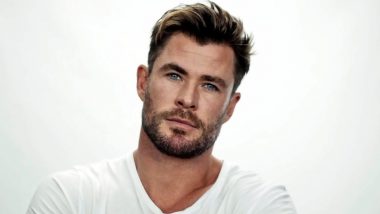 Hollywood superstar Chris Hemsworth recently reflected on his career and why critics don't view him as a "serious" actor during a new interview about Thor: Love and Thunder. According to E! News, Hemsworth said that movie fanatics do not rank his acting talents alongside the likes of Leonardo DiCaprio or Daniel Day Lewis simply because he's muscular. Chris Hemsworth's Shirtless Surfing Pics Are Going Viral For The Right Reason - Check Them Out!

He explained, "Bodybuilding is seen as vanity, whereas if I put on a bunch of unhealthy weight, or got unhealthily skinny for a role, I'd probably be called a serious actor." Talking about portraying Thor as not being an easy task, the actor said, "The training across 10 years of doing it is a full-time job." Extraction: Chris Hemsworth Will Not Be Coming to India To Promote His Netflix Film Over Coronavirus Danger.

He continued, "That and then a 12-hour shooting day--it's real grind. It's incredibly rewarding, too--you have to look at it like a professional athlete." Indeed, as the Marvel star explains, "there's an aesthetic that the role requires." After all, Thor is a literal Norse god.

As per E! News, Hemsworth and the rest of the crew have started filming on the fourth installment of the franchise, Thor: Love and Thunder, following a postponement caused by the coronavirus pandemic. He said the nearly five-month delay was for the best, as it gave him more time to prepare for the role.